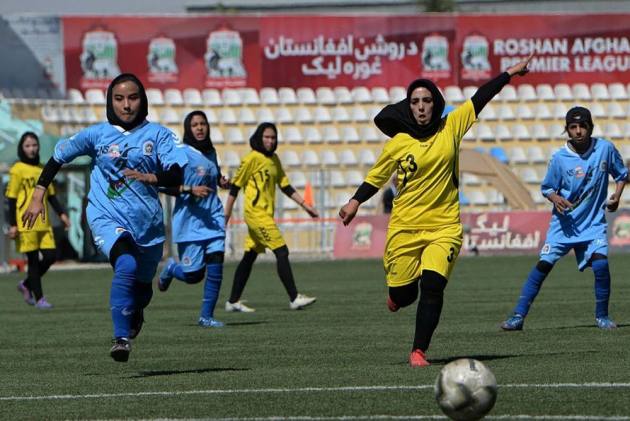 Senior officials of the Afghanistan Football Federation are seeking refuge in India in the wake of Taliban taking control of the war-ravaged nation. (More Football News)

According to a senior football functionary in India, officials in Afghanistan, who don't wish to be identified, are fearing a backlash from the brutal Talibanis for promoting women's football in the country.

Dr Shaji Prabhakaran, the president of Football Delhi and a former regional head of FIFA, told Outlook on Sunday night that the Afghanistan officials and their families fear for their lives because they have promoted women's football in the country for the last seven years.

"Taliban is in control of Kabul and the situation is very grim. The airport is still safe but the Taliban will soon block everything," said Dr Prabhakaran, quoting the Afghan officials.

Dr Prabhakaran has drawn the attention of the Ministry of External Affairs but so far, there has been no reaction. The All India Football Federation said it has not received any request for help.

Women's football in Afghanistan made international headlines for the wrong reasons in 2019.

Another day begins in Kabul, a sea of people rushing into the Kabul airport terminal. #AFG pic.twitter.com/UekpGJ2MWd

In 2018, Khalida Popat, a former captain of the women's team of Afghanistan, had asked an English newspaper to publish her findings on two presidents of the national football federation who sexually exploited female footballers in the country.

EXCLUSIVE: 'People Are Terrified In Kabul, The Taliban Is So Savage And Brutal'

In 2019, FIFA banned Keramuudin Karim as president of Afghanistan Football Federation, a position he had held and exploited since 2004.

In 2007, Khalida and her friends formed the first Afghanistan national women's football team. In 2012, Khalida escaped to Denmark and became a refugee.

“Life became difficult. I received death threats and was banned from travelling and talking to the media. They took my respect. I could not do anything. I had no other choice than to leave my country.”

“Under the Taliban regime, women had no rights to go to school, to the doctor, or to work. They were confined to their homes. So we started to play football which was quite new in our culture because sport was not seen as something for women,” Khalida has been quoted as saying.

ALSO READ: Taliban At The Gates Of Kabul, Says Won't Take City Over By Force

During her investigation from Denmark, Khalida had discovered that several players had been sexually abused and raped by the president of the football federation and some of the team coaches and leaders when they were only 15-16 years old.

“The president used his power to build a private kingdom inside the football federation. He is a former warlord and the creator of a culture of abuse. He was protected by armed bodyguards. Inside his office he had a private bedroom. He was forcing the players into the room where he was sexually abusing and beating them,” Khalida Popat explained

Afghans fearing that the Taliban could reimpose the kind of brutal rule that all but eliminated women’s rights rushed to leave the country as well, lining up at cash machines to withdraw their life savings.

The desperately poor — who had left homes in the countryside for the presumed safety of the capital — remained in their thousands in parks and open spaces throughout the city, reports AP.

Recently, Afghanistan's cricket star Rashid Khan had appealed to world leaders to help bring peace in his country. Not many countries seem to have reacted as Taliban captured one city after another is what seemed a cakewalk.

For several years, the Afghanistan cricket team had made India their base camp. Quite a few of them are regulars in the Indian Premier League. Now the football officials face uncertain times.