European clubs have been threatening not to release any players at all for the African Cup of Nations after raising doubts about coronavirus health protocols put in place by the Confederation of African Football. 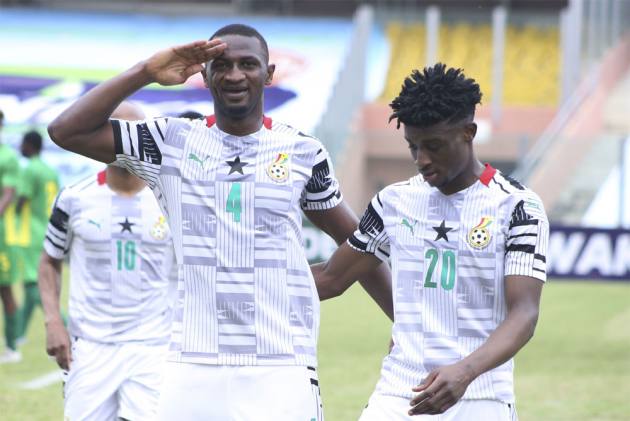 African Cup of Nations organizers insist the tournament will begin as planned in Cameroon despite the fast-spreading omicron variant adding to an extensive list of concerns. (More Football News)

Perhaps the biggest doubts now are when national teams will have their full 28-man squads to prepare for Africa's biggest football event early next month.

European clubs have been threatening not to send any players at all after raising doubts about coronavirus health protocols put in place by the Confederation of African Football.

Now the organization representing the world's leading domestic leagues says teams shouldn't have to release players until January 3, a week later than stipulated by FIFA and only six days before the tournament begins.

"(The African Cup) will start one week earlier than normally, due to its extended format and CAF has encouraged FAs to call up more players than ever," the World Leagues Forum wrote Thursday to the world and African governing bodies in a letter seen by The Associated Press.

"These decisions, made unilaterally by FIFA and CAF, have a huge impact on domestic competitions’ integrity, placing many clubs and players in a difficult position."

The world's two biggest leagues in England and Spain — the Premier League and La Liga — have matches on Jan. 2 and continue throughout the African Cup.

The World Leagues Forum called the earlier requirement for players to go on international duty "unreasonable and disproportionate for many clubs and players who are still playing at that time", and said that any sanction imposed by FIFA on clubs would be deemed "abusive, null and void."

While there have been talks about whether the already-delayed 2021 African Cup of Nations might be postponed for a second time because of the coronavirus pandemic, or even moved to a country outside Africa, CAF continues to insist that it will still open on Jan. 9 at the Olembe Stadium in Yaoundé.

"Our clubs release players for these national team matches for free while still paying their salaries,” the World Leagues Forum said in its letter to FIFA and CAF.

"This makes it possible for CAF to generate revenues and commercialize all rights into the AFCON to fully invest in the development of African football. Our clubs gladly commit to this solidarity scheme. But in consideration, we expect decisions not to be made in isolation by FIFA and CAF."

The first African Cup in the pandemic era will put CAF president Patrice Motsepe's promise to improve the quality and marketability of the event to the test.

"All over the world there are competitions with challenges but we have to be more optimistic," said Motsepe, who became head of African soccer this year.

Despite his optimism, it's likely that African soccer will settle for a tournament that goes off without any serious problems. There was a battle even before the virus to get the Central African nation ready to stage its first major sporting event since 1972.

Cameroon was initially due to host the 2019 African Cup but was stripped of that tournament because of problems with its preparations and given a second chance in 2021. Then, the event was put back a year because of the pandemic.

Now the virus has forced a stretched host country still struggling with the basics of getting stadiums ready to take on the additional challenge of ensuring Africa's most popular sports event doesn't become a virus super-spreader.

To satisfy Cameroon authorities, CAF has agreed that only fully vaccinated fans who also have proof of negative COVID-19 tests will be allowed to attend games.

Pharmaceutical company UNILAB has been employed to oversee the testing of players to mitigate against virus outbreaks among the 24 teams. There will be screening at every stadium, training ground and tournament venue, CAF said.

The restrictions for fans was a deal-breaker for the Cameroon government but it's set to leave many — maybe all — of the 52 games over a month to go ahead in near-empty stadiums.

Less than 3% of Cameroon's 26 million people are fully vaccinated against COVID-19, meaning only a miniscule number will be allowed to witness first-hand their country's biggest sporting moment since first hosting the African Cup of Nations half-a-century ago.

The soccer-mad West and Central African countries around Cameroon also have vaccination rates of well below 10%, so many other fans won't be traveling.

The problems stretch beyond the virus and fans in stadiums, with Cameroon cutting it fine to have stadiums ready at all.

The main Olembe Stadium, which will host the opening game between Cameroon and Burkina Faso and the final on Feb. 6, is undergoing a $370 million revamp but hasn't yet been officially opened. It was so far behind schedule last month that CAF threatened to move the opening game.

Cameroon has missed deadlines on other stadiums, too.

The country also has a violent insurgency in its southwestern region, where militias have fought for years to form a breakaway state near Limbe, one of the tournament's five host cities. Last month, an explosion at a university campus injured 13 students about a mile from an official African Cup training ground.