For the first time since 2004, Barcelona will be without Messi because it couldn’t sign the Argentina star to a new contract 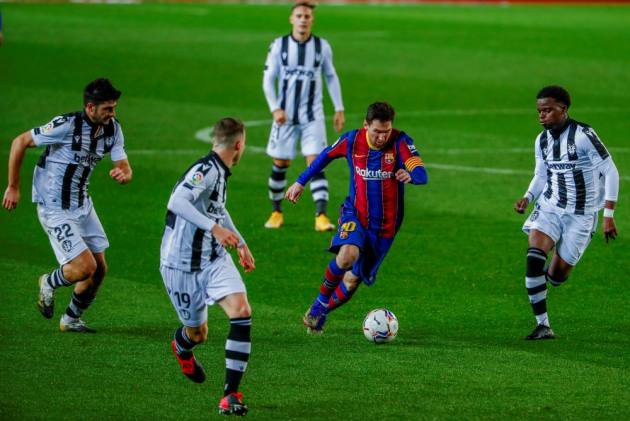 The Spanish league season begins this weekend and it will be unlike any other in the last 17 years. (More Football News)

It will be the first without Lionel Messi, its all-time top scorer and one of its greatest players ever.

For the first time since 2004, Barcelona will be without Messi because it couldn’t sign the Argentina star to a new contract due to its troubled financial situation.

The last time the league didn’t feature Messi, the likes of Diego Simeone, Zinedine Zidane and Luis Enrique were still playing instead of coaching.

Real Madrid forward Vinícius Júnior and Atlético Madrid forward João Félix were only 4 years old. Former Barcelona player Neymar was entering his teenage years and had just signed his first contract with the youth squad of Brazilian club Santos. Real Madrid target Kylian Mbappé was a 5-year-old whose bright future was as yet unknown.

Barcelona won the league only twice in the decade before Messi debuted. In the next 17 seasons, it won it 10 times. He won the league’s scoring title a record eight times in that period, leaving with a record tally of 474 goals from 520 matches in the competition.

Now the Catalan club will have to find a way to succeed without Messi, and while still facing the difficult financial situation that led to his departure.

"When you lose the best player in history, you have to be realistic and understand that you lose a very important piece of the squad. He contributed with a lot of goals and assists," said Gerard Piqué, the veteran captain who arrived at Barcelona three years after Messi’s debut.

"We won’t be as talented as before and we have to make it up in other areas. The other players will have to step up and take up other roles. The team will have to adapt. In the end things will work out. We are Barcelona and we will keep competing for titles."

Coach Ronald Koeman, who was in his early managing years when Messi debuted, remained optimistic going into the home opener against Real Sociedad on Sunday.

"Despite Messi’s departure, we are very excited about going into this new season, about our squad, about our new players,” Koeman said Sunday before Barcelona’s 3-0 win over Juventus in its final preseason match.

Dutch international Memphis Depay, the club's star signing in the offseason, had promising performances in preseason. Sergio Aguero, though, won’t be able to debut until mid-October because of an injury.

Antoine Griezmann and youngster Ansu Fati will continue to contribute in attack, while Pedri González will carry a bigger playmaking role in midfield.

Real Madrid is also not doing well financially because of the coronavirus pandemic, and lost a star player going into the new season -- Sergio Ramos, who had been with the club since 2005 and now will play for Paris Saint-Germain. He wanted to stay but Madrid decided not to renew his contract to save money.

Madrid, which opens at Alavés on Saturday, will be coached by Carlo Ancelotti after Zidane quit at the end of last season. It will continue to feature Karim Benzema, Eden Hazard, Toni Kroos, Marcelo, Luka Modric and Thibaut Courtois. Also in the team will be Gareth Bale, back from his loan spell at Tottenham.

Atlético Madrid, which last season triumphed by taking advantage of the struggles of Barcelona and Madrid, will defend the title with almost all of its players back under the command of Simeone.

Argentina midfielder Rodrigo de Paul was added to the squad that again will be led by Luis Suárez, the former Barcelona striker who scored 21 league goals last season and was key for Atlético. Félix will remain another weapon in attack, while the defense will be anchored by goalkeeper Jan Oblak. The team opens at Celta Vigo on Sunday.

Julen Lopetegui's Sevilla will remain an outside contender after being in the title race until late last season. It added forward Erik Lamela to a squad which saw striker Youssef En-Nesyri blossom into a top scorer last term. Its first match is against promoted Rayo Vallecano on Sunday.

The Spanish government will allow stadiums to have crowds of up to 40% capacity. Only a limited number of fans were allowed into games at the end of last season in parts of the country where the pandemic was more under control.

The first match will be on Friday between Valencia and Getafe. (AP)