Delhi Capitals will clash with Mumbai Indians in the final of IPL 2020 in Dubai on November 10. 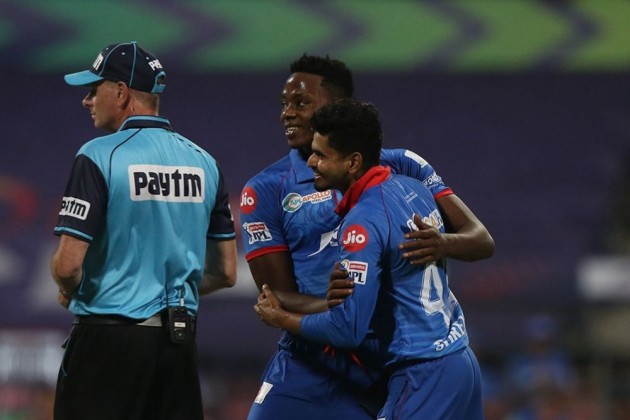 This IPL has seen emergence of fast bowlers as a viable option to win matches. Yes, they are easy to get away when they deviate from the line and length, even edges sometimes fly for six, but somehow, they have managed to bounce back and top the wickets chart this season.(HIGHIGHTS)

Look at the top wicket takers this year. At third place is Trent Boult (22 wkts), topping him is Jasprit Bumrah (27 wkts) and on top is Kagsio Rabada with 29 wickets. (FIXTURES & RESULTS)

All three top line bowlers who can walk into any team and a dreadful prospect for batsmen all around the world. So, when Rabada finished with 4/29 setting up a Delhi Capitals win, it wasn’t a surprise. (NEWS)

The ball that perhaps sealed the match came very early in the innings.  David Warner was the key player for Sunrisers Hyderabad and his wicket was the key. Rabada delivered. A ball that was fast and swung in cramping Warner for room, ricocheting of the pads on to the stumps.
“ (David) Warner came quite hard at us in the previous game we played against them. He is a fantastic player. There was a bit of swing and so I wanted to go full and straight, and it paid off,” Rabada said after the match.

Rabada came in to bowl when a counter-attack by Kane Williamson (67) and Abdul Samad (33) had almost brought Sunrisers Hyderabad back into the match. As Marcus Stoinis (38 runs and 3/33) snared Williamson it was left to Rabada to close the match for his side.

Rabada ended up with three wickets in an over as SRH were looking for quick runs killing the contest instantly. Although the wickets came of three consecutive balls, a wide in between denied him a well-deserved hat-trick. In one over, Rabada removed Abdul Samad (33), Rashid Khan (11) and Shreevats Goswami (0).

The South African pacer later said that he will trade all his wickets for the title. “Today was just my day. I don't think, I bowled well in the last over. But there are days when you bowl well with no rewards so I will take that. If we end up winning the tournament, the contest for the purple cap doesn't matter,” Rabada said.

This is Delhi Capitals maiden foray into an IPL final. Up against Mumbai Indians, the task will not be easy but Rabada feels the team will have to play well. DC are yet to post a win against MI this season.

Mumbai Indians won the first by five wickets, second by 9 wickets before blowing DC away in the first qualifiers. DC lost the qualifiers by 57 runs but a win on Sunday, gives Shreyas Iyer-side a chance to right the wrong.

“Now it is all about sealing it off. Hopefully, we make more history in the final game. The IPL final is huge. It is a huge tournament because of the magnitude of the players. The skill level is high. Mumbai (Indians) are a good team. We are a young team but we have a lot of talent as well,” Rabada added.

Delhi skipper Shreyas Iyer also echoed Rabada’s emotions adding, “This is the best feeling ever. This has been a rollercoaster. A lot of ups and downs. We have stuck together like a family. In the next game too, we have to play freely and maintain our temperament.”