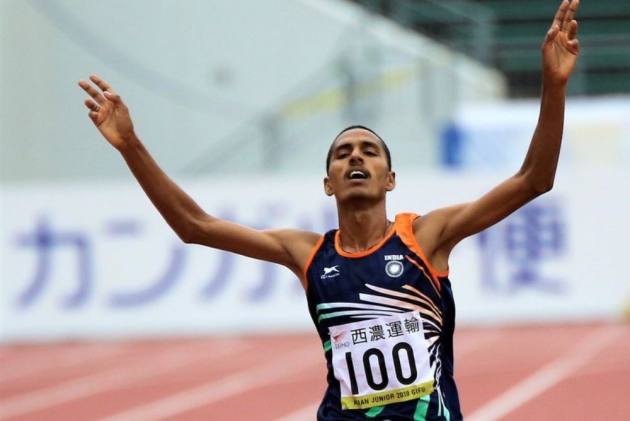 Ajeet clocked his personal best time 3:47.31 in the 1500m, sprinting away in the final lap after being within sniffing distance of Ishu Solanki (Haryana) who led at the bell.

Kiran Baliyan of UP, who won the women's shot put at the National Open Championships in Warangal with a 16.99m effort, was an easy winner with a best of 16.11m. Each of her six efforts were better than the best that others managed. Kachnar Chaudhary's last-ditch attempt fetched her silver at 14.71m, ahead of Karnataka's Ambika (14.21m).

In the morning, Maharashtra's distance runners Adesh Yadav and Komal Chandrakant Jagdale won the men's and women's 5000m titles respectively with a measure of comfort but in contrasting styles.

Later, Parshant Singh Kanhaiya (Haryana) equalled his personal best of 5.10m to win the men's Pole Vault gold. Haryana men Ayush Dabas (47.31 seconds) and Vikrant Panchal (47.42) won their respective men's 400m semifinals but Tamil Nadu's Surendar Selvamani (47.38), running his first event at the national level in more than 20 months, came up with a personal best time as the final promises a close contest between the trio.

West Bengal's Mohammed Hossain was another who dipped in under 48 seconds in the semifinals while Karnataka’s Nihal Joel William (48.00) and Punjab's Karanpreet Singh (48.01) went pretty close to achieving that as well. Delhi's Taranjeet Kaur (11.72 seconds) and Karnataka’s AT Daneshwari (11.73) were the fastest qualifiers for the women's 100m final.

Telangana’s Nithya Gandhe (11.91) and Maharashtra’s Avantika Narale (11.97) were others who caught the eye in the heats.  In the men's 100m semifinals, Shashikanth Angadi of Karnataka was the fastest in 10.53 seconds. In long jump, Sherin Abdul Gaffoor (Tamil Nadu) had a qualifying leap of 6.31m. Pooja Saini (Rajasthan), R Punitha (Tamil Nadu) and Sandra Babu (Kerala) also recorded jumps over the 6m mark.

Three others went past the 5.90m mark that was good to get them into the final rather comfortably.