Tigres await Bayern Munich in the Club World Cup final after Hansi Flick's men did enough to see off Al Ahly, Robert Lewandowski getting both goals. 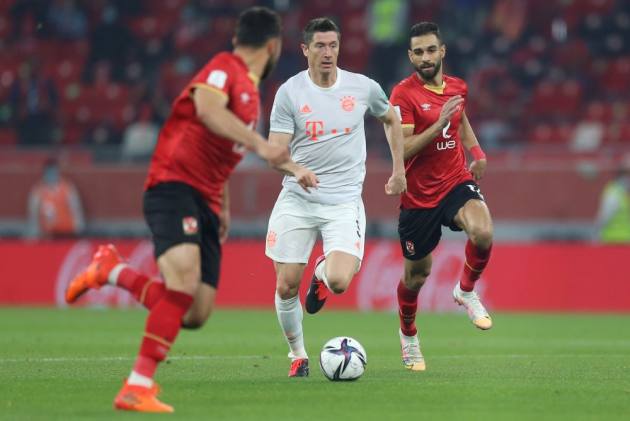 Bayern Munich secured their place in the Club World Cup final thanks to a straightforward 2-0 win over Al Ahly, with Robert Lewandowski getting both goals. ( More Football News)

The German and European champions were not at their spectacular best but looked comfortable throughout, doing enough to earn a shot at lifting the trophy for a second time.

Bayern dominated the first half almost from start to finish but could only take a 1-0 lead into the break, Lewandowski getting his 28th goal of the season, and Al Ahly appeared encouraged after half-time.

However, the Egyptians did not have the quality to cause Bayern any sustained worries and Lewandowski sealed the win late on, with Hansi Flick taking his team to another final as he looks to make it six titles won in just 68 matches at the helm when they meet Tigres of Mexico in the showpiece.

It did not take Bayern long to establish control, as Serge Gnabry received Kinglsey Coman's cross and showed great awareness to calmly tee up Lewandowski for a simple finish in the 17th minute.

Further Bayern chances came thick and fast for the remainder of the first half, but the Germans were wasteful – Marc Roca shot wide and then also straight at Mohamed El-Shenawy in a two-minute spell, before Alphonso Davies dragged a right-footed effort past the left-hand post just before the break.

But Lewandowski was the surprising culprit a few moments prior to Davies' chance, as the Best FIFA Men's Player award winner lifted a chipped effort over the goal from inside the box after a clever release from Joshua Kimmich.

Ah Ahly looked a little more dangerous during the early stages of the second half, though Bayern were still unfortunate not to increase their lead when Thomas Muller agonisingly failed to reach David Alaba's across-goal header.

Bayern began to up the pressure again towards the end, with Ayman Ashraf almost slicing a cross into his own net, before Eric-Maxim Choupo-Moting headed at El-Shenawy and Corentin Tolisso shot just over from distance.

Although an equaliser looked unlikely, Bayern made sure of the win five minutes from time as Leroy Sane dug out a cross from the right and Lewandowski was on hand for the simplest of headers.

One step away from immortality

What does it mean? – Bayern get the job done without impressing

Bayern are into another final, so from their perspective this victory is very much a case of job done, but Flick may be a little frustrated it was not more comprehensive.

Al Ahly managed only two shots on target in the whole match, which perfectly reflects Bayern's control on proceedings, but just seven of their 24 attempts were accurate.

They were wasteful, especially in the first half, and they will surely expect a greater test of their defence against Tigres and the in-form Andre-Pierre Gignac. They may not be able to afford such profligacy next time.

Although deployed in a deep midfield role, Kimmich often appeared to be acting as a second attacking midfielder in behind Lewandowski, and that is reflected by the fact he laid on an un-matched six key passes. The Germany international was everywhere, also topping the charts for attempted passes, completed passes and touches.

Sane sparkles off the bench

It has not been entirely smooth sailing for Sane since joining Bayern last year – he is still in and out of the team, with this game a prime example as he was left on the bench. However, after his introduction, he played three key passes in half an hour and one of those was for Lewandowski's second.

Bayern will face Tigres in the final on Thursday, a few hours after Al Ahly and Palmeiras go head-to-head in the third-place play-off.