Manchester United lifted the FA Cup in 1990, but Crystal Palace pushed them all the way. Nigel Martyn remembers the famous final 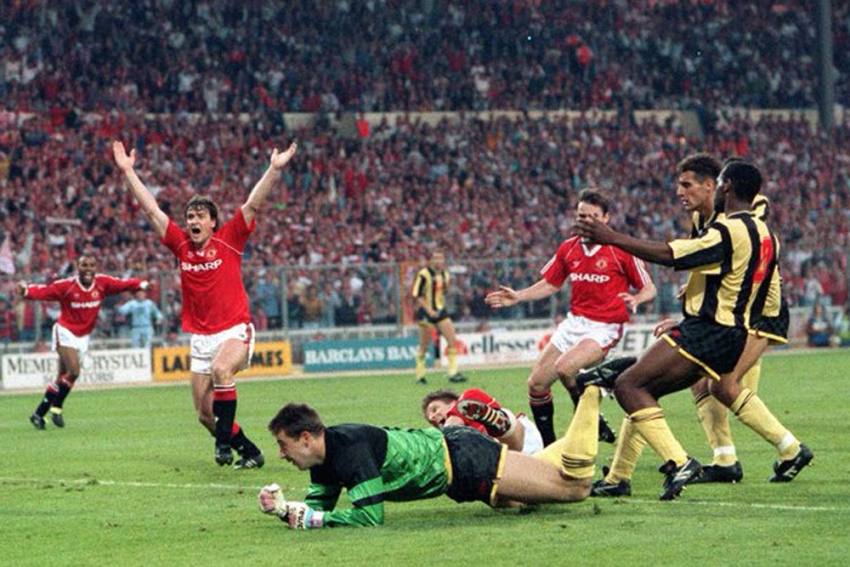 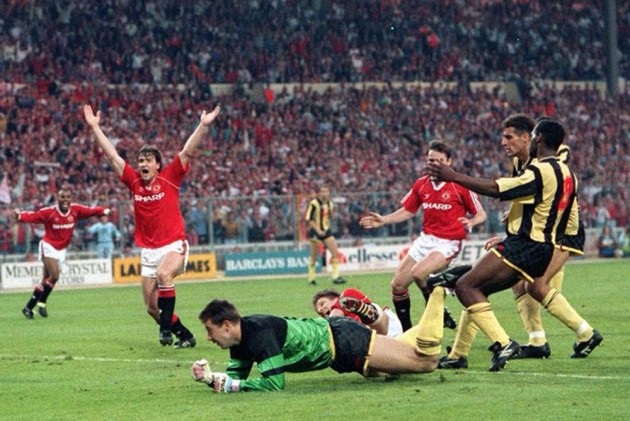 Arriving from Aberdeen, the Scotsman won 38 trophies, knocked Liverpool off their perch – just as he promised – and conquered Europe before retiring as a knight of the realm and a club legend.

However, amid some rocky early years to the Ferguson era, divorce seemed imminent.

Midway through the 1989-90 season – the manager's fourth in charge – United endured an 11-match winless run in the Football League. They would end up finishing the campaign in 13th, their lowest finish in the top flight since suffering relegation in 1974.

Thankfully for the under-pressure boss, the FA Cup eased the growing pressure. Mark Robins clinched a crucial third-round win over Nottingham Forest, triggering a run that would end up with a trip (two, actually) to Wembley in May.

The final against Crystal Palace provided a classic in the first meeting, followed by an unlikely hero in the replay. It was the start of a dynasty for Ferguson, yet things could easily have worked out differently had the Eagles landed the trophy.

On this day in 1990, #mufc beat Crystal Palace to win the FA Cup. It was Sir Alex Ferguson's 1st trophy at the club. pic.twitter.com/AeZvuDKLjp

Here, with insight from former Palace goalkeeper Nigel Martyn, is a reminder of how Ferguson claimed his maiden honour as United boss exactly 30 years ago.

While United knocked out semi-final foes Oldham at the second attempt, Palace ended Liverpool's hopes of a domestic double in the other last-four tie, recording a thrilling 4-3 victory at Villa Park over the same team who had thrashed them 9-0 earlier that season in the league. In the second period of extra time, Alan Pardew nodded in the winner at a well-worked corner move.

Martyn: Fortunately for me, I hadn't been bought at that time (for the 9-0 defeat), so Perry Suckling was in goal. I'd seen the goals and none of them were his fault!

As for the day of the semi-final, it was hot. Steve Coppell sent us out with a game plan of keeping it as tight to go in at 0-0 at half-time if we could, making the game as small as possible. If we could play them over just 45 minutes, it gave us a better chance. We were not too adventurous in the first half and tried to prevent them from scoring, though obviously Ian Rush broke the offside trap to get a goal. But apart from that, they didn’t cause us too many problems. Nobody expected it to be quite as quick in the second half as it was.

It ebbed and flowed. We went 2-1 up and you start to think, can we? Then you're suddenly 3-2 down and praying for something to happen. Andy Gray pops up and equalises to go into extra time, then Pards scores from a routine we had practiced a lot. It was satisfying that all the hours in the pouring rain at training sessions, when you're desperate to finish, paid off.

To the final itself, then. The Eagles edged in front in the 18th minute through centre-back Gary O'Reilly, the ball looping over United goalkeeper Jim Leighton.

However, the Red Devils levelled before half-time thanks to a Bryan Robson header that found the net with the aid of a deflection off John Pemberton.

Martyn: It was a joyous feeling [to go in front]. Trying to keep a clean sheet then becomes the ultimate goal, but then we conceded fairly quickly after that with a Bryan Robson header that if I could say it was going to be the most comfortable save I could make, that was what it was going to be. However, 'Pembo' had a big swing at it when standing in front of me. It's deflected off him and gone in at the corner. The initial header was tame at best until the touch, but he was trying to do the right thing as he doesn't know where I am.

United benefited from a slice of luck with their second goal, too. A clearance was charged down by the sliding Neil Webb, with the deflection sending the ball scooting across the penalty area into the path of the grateful Mark Hughes, who finished to put Ferguson's side in front just after the hour mark.

Martyn: Mark didn't need a second invitation in front of goal. He buries that and then, at that moment, there's an initial bit of panic that goes through your mind, but there was enough time left in the game.

Palace responded to falling behind by sending on Ian Wright in the 69th minute. The striker had broken his leg on March 20 and missed the semi-final against Liverpool.

Martyn: Ian was busting a gut in training to get back to fitness, training his socks off. The gaffer was very tentative about playing him. He was our most valuable asset at the time, but you have a duty of care to the player. If he's not quite a 100 per cent, the decision was whether to start him and get 60 minutes, or see how things are going and throw him on as an impact. That's what he did – and it worked. He twisted Gary Pallister inside out to get the equaliser.

Wright did indeed level with a superb finish. The teams remained deadlocked through to the end of 90 minutes.

Extra time was required to try and find a winner on the day – and it was Palace who moved ahead again through their talismanic super sub.

Martyn: John (Salako) goes down the wing and puts in a cross that finds Ian there ready to finish it. You get to half-time [in extra time] and you almost think you're there. I can remember making a save from Paul Ince, a fairly decent one where he's hit it and I've managed to get it over the bar. At that point I thought it was going to be our day.

Hughes had other ideas, though. For the second time, the Welshman found a way to beat Martyn. Clean through on goal, he made poor contact with his effort but it still reached the net.

Martyn: As he's played through, I'm coming down the line of where the ball is going to be as he hits it. I'm waiting for a clean contact, definitely. Because he scuffs it, though, the ball goes further away from me and then on the second bounce spins back in. You can't practice for that; it happens from time to time. You get beaten by scuffed shots because you are setting yourself for a clean strike, because that's what you expect at that level. But, because of the scuff, that sends it in.

So 3-3 at the end of extra time. No penalty shoot-outs back then, meaning all back to Wembley on the Thursday for a replay.

Martyn: Who knows what happens with penalties, but I think it was the same for both sets of players at the time to get things done then. It would have been better for penalties, because the whole FA Cup had been around getting to that final. Instead it was an anti-climax, because you couldn't celebrate or drown your sorrows in the evening with another game to go. It was an odd feeling.

Ferguson sprung a surprise for the replay too, dropping Leighton as Les Sealey - signed on loan from Luton Town in December 1989 - started in goal.

Martyn: It was a big thing at the time. Les was a good pro, a good keeper. A bit more vocal perhaps than Jim, perhaps to get the lads going. You could say that it was a masterstroke, because he had a good game on the day and seemed to get them going a bit.

The other issue was over Ian. I can remember speaking to Gary Pallister at an England gathering later that year, I think, not long after when I'd just got into the squad, and he said he was petrified that 'Wrighty' was going to play. However, Steve kept him on the bench again.

After the goal glut in the first meeting, the sequel failed to hit the same heights. A solitary goal settled the matter, scored by Lee Martin just before the hour. The defender's forward run down United's left was picked out by Webb's floated pass, with a touch on the chest teeing up a rising shot into the roof of the net.

And Irwin's joined in our Wembley dream team by the runner-up in our full-back poll - 1990 FA Cup winner Lee Martin. pic.twitter.com/rkJWfwGd9z

Martyn: There could have been three of us in goal and we wouldn't have saved it. On another day, that goes somewhere near row Z, but fortunately for him and United it flew in. There was not a lot I could do. The following season United went on to win the Cup Winners' Cup, because they obviously qualified through the FA Cup, and that really cemented Ferguson in.