The world number 30 pair of Ashwini and Sikki took just 33 minutes to see off the 13th ranked duo of Gabriela and Stefani 21-17 21-10 in the second-round match on Thursday night. 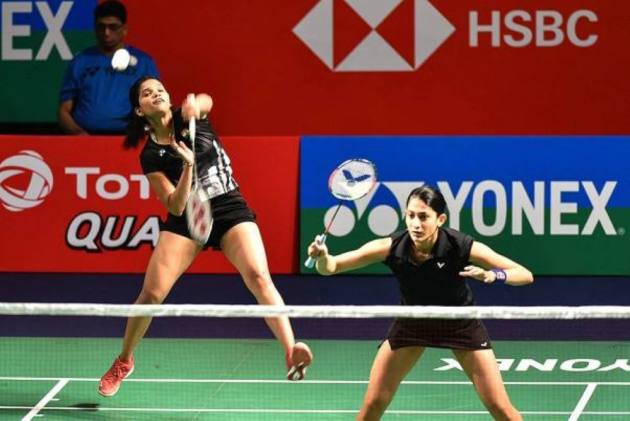 The world number 30 pair of Ashwini and Sikki took just 33 minutes to see off the 13th ranked duo of Gabriela and Stefani 21-17 21-10 in the second-round match on Thursday night.

The Indian duo has a good opportunity to reach the semifinals as it next faces Netherland's world number 24 Selena Piek and Cheryl Seinen, who were benefitted due to the withdrawal of their Indonesian opponents third seeds Greysia Polii and Apriyani Rahayu.

The entire Indonesian team was forced to withdraw on Thursday after the UK Government's National Health Service (NHS) Test and Trace service decided to self-isolate all the players and officials following a COVID-19 case in their flight to London.

It was their second consecutive defeat against the world number 13 pair, having lost to them at Swiss Open earlier this month.

In the men's singles, Sameer Verma too suffered a second successive loss to third seed Anders Antonsen of Denmark, going down 22-20 21-10 this time in the second round.

Mixed pair of Dhruv Kapila and Meghana Jakkampudi also bowed out after losing 19-21 8-21 to Niclas Nohr and Amalie Magelund of Denmark.