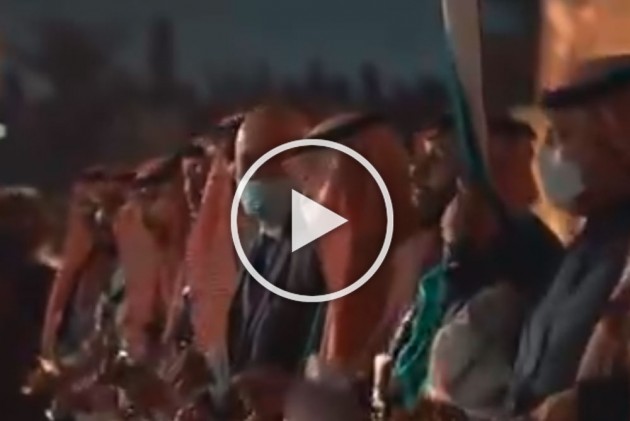 Human rights activists are denouncing FIFA President Gianni Infantino's starring turn in a promotional video for the Saudi Arabian government in which he claims the kingdom has made important changes. (More Football News)

The slick 3½-minute PR campaign was posted on Twitter by the Saudi ministry of sport on Thursday, featuring Infantino participating in a ceremonial sword dance and sweeping shots of the palaces of Diriyah.

Gianni, President of #FIFA :
What I experienced here is impressive, the world in its entirety should come to Saudi Arabia to watch it. The big improvement that underwent the past two years are unbelievable.pic.twitter.com/iDPNXuPAuR

"It's an amazing scenery, it's an incredible history," Infantino says in part. "This is something that the world should come and see."

The video, which also features Infantino praising how "a lot has changed" in Saudi Arabia, was filmed while on a trip that saw him meet with the crown prince, who has been credited with introducing social changes while cracking down on activists who pushed for reforms.

"It should be abundantly clear to everyone at FIFA that Saudi Arabia is attempting to use the glamour and prestige of sport as a PR tool to distract from its abysmal human rights record," Amnesty International said in a statement to The Associated Press.

FIFA and other major soccer competitions have spent more than three years trying to stop a Saudi-facilitated broadcasting operation from pirating broadcasts from Qatar's beIN Sports. FIFA issued a statement in 2019 saying the "piracy continues unabated" and requesting the "Saudi Government take swift and decisive action against beoutQ."

That has not happened with beIN, which owns the rights to World Cup matches across the Middle East, outlawed in Saudi Arabia.

Asked if Infantino used the meeting with the crown prince to raise issues over the illicit broadcasting operation, FIFA only pointed to a statement from last year after the World Trade Organization found the Saudi state blocked moves to shut down beoutQ.

FIFA said the "main purpose" of the two-day trip to Saudi Arabia during the coronavirus pandemic was "to witness the signing of the historic declaration between the member states of the Gulf Cooperation Council."

The declaration Tuesday eases a rift with Qatar, following Saudi Arabia's decision to end a 3 1/2-year embargo of the tiny energy-rich country that has been impacting preparations for the 2022 World Cup around Doha.

FIFA did not say if Infantino challenged Prince Mohammed on human rights issues in Saudi, given the governing body's own code.

"It's worrying that Gianni Infantino has apparently endorsed a video where he hails the 'greatness' of Saudi Arabia but says nothing about its cruel crackdown on human rights defenders," Amnesty said, "including people like Loujain al-Hathloul, who was given a jail sentence only days ago."

Al-Hathloul, who is one of Saudi Arabia's most prominent women's rights activists, was sentenced to nearly six years in prison under a vague and broadly-worded counterterrorism law.

She has spoken out against guardianship laws that barred women from traveling abroad without the consent of a male relative, such as a father, husband or brother. The kingdom eased guardianship laws last year, allowing women to apply for a passport and travel freely.

"We would urge Mr. Infantino to clarify the circumstances of his appearance in this video and to make a statement expressing support for jailed women's human rights defenders like Loujain al-Hathloul," Amnesty said.

Scrutiny over Infantino's links to Saudi Arabia in 2018 led to FIFA offering assurances that no nation would be allowed to fund its plans for new competitions.

That followed a global uproar that saw Western businesses turn away from the crown prince and the sovereign wealth fund following outcry over Saudi writer Jamal Khashoggi's slaying and dismemberment by government agents inside the kingdom's consulate in Turkey.

Prince Mohammed denies any involvement of the killing of one of his critics. U.S. intelligence agencies, however, said an operation like this could not have happened without his knowledge and the the UN's special rapporteur said he was liable.

Khashoggi's fiancee called on the Premier League to block moves to buy Newcastle United last year by Saudi's sovereign wealth fund, which is headed by the prince. The takeover collapsed amid concerns about piracy and human rights complaints.

FIFA said Infantino used his meetings to discuss how football can be a "vector of core social values, such as inclusion, solidarity and tolerance."

"Surely he should recognize that he, football and sport in general risk being used as part of Saudi Arabia's long-established sportwashing operation," Amnesty said.

Infantino has been on a tour of Middle East countries in recent weeks, including Dubai for an awards' ceremony and Abu Dhabi where he met Crown Prince Sheikh Mohamed bin Zayed Al Nahyan and Manchester City chairman Khaldoon Al Mubarak.