With Juventus 'alive' again in the top-four race, Andrea Pirlo is not prepared to throw in the towel as head coach 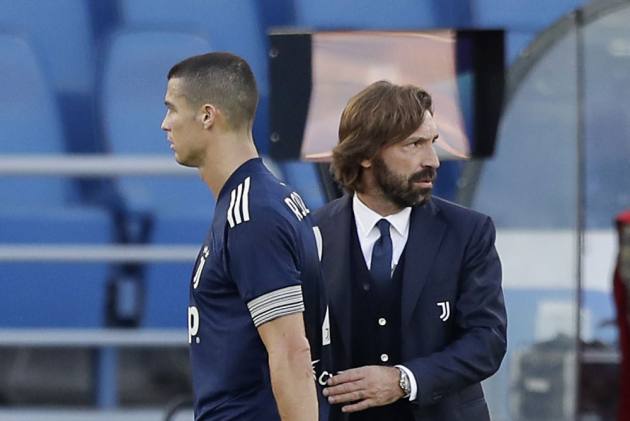 Andrea Pirlo still hopes to stay on as Juventus coach and keep Cristiano Ronaldo at the club as he prepares for Sunday's decisive Serie A clash with Bologna. (More Football News)

Juve sit fifth in the table after 37 matches, a point behind Napoli in fourth and Milan in third, and they know they must win to have any chance of finishing in a Champions League spot.

Pirlo's first season in charge has been difficult. The Bianconeri lost their title to Inter and crashed out of the Champions League to Porto at the last-16 stage.

However, they have still claimed two trophies in 2021, winning the Supercoppa Italiana match against Napoli in January before lifting the Coppa Italia this week after defeating Atalanta 2-1 in the final.

Speculation persists that Juve will look to replace Pirlo before next season, while it has also been rumoured they could sanction the sale of Ronaldo, who has scored 36 goals in all competitions this term.

Pirlo, however, appears eager to keep working with Ronaldo at the Allianz Stadium and improve on his first campaign in the dugout.

4 - Andrea Pirlo is the fourth Juventus manager to have won the Coppa Italia both as a player and as a coach, after Luis Monti, Carlo Parola and Dino Zoff. Elite.#TIMVISIONCUP #AtalantaJuve pic.twitter.com/Lo1w32ku5b

"We do this job for the adrenaline that it brings," he said on Saturday. "I want to continue working with this team and this club, but I think that's normal.

"The greatest satisfaction of this season has been the relationship with the boys, who have given me a lot, whilst I haven't liked the results and we didn't reach the set goals.

"I was a winner as a player, I want to be a manager, so I think of this year as an opportunity to improve. I don't think that the club will decide my future on the basis of tomorrow. We'll see what happens.

"After the Milan game [a 3-0 defeat on May 9], we were 'dead'; now, we are still alive. Let's think about ourselves first, and then see what happens elsewhere. We mustn't have any regrets. There is always pressure, but we are calm and there is enthusiasm."

He added on Ronaldo: "I see Cristiano at Juventus and extremely focused, just as I saw him in the Coppa Italia final on Wednesday."

One figure who is set to leave Juve after this season is Gianluigi Buffon, with the 43-year-old having announced he will not commit to the club for 2021-22.

Pirlo said of his old team-mate: "With Buffon, Juve is losing a monument of football, both on and off the pitch. It's a sad feeling as we have come a long way together. I admire him very much."