Andres Iniesta At 36: Ten Of The Barcelona And Spain Great's Best Moments 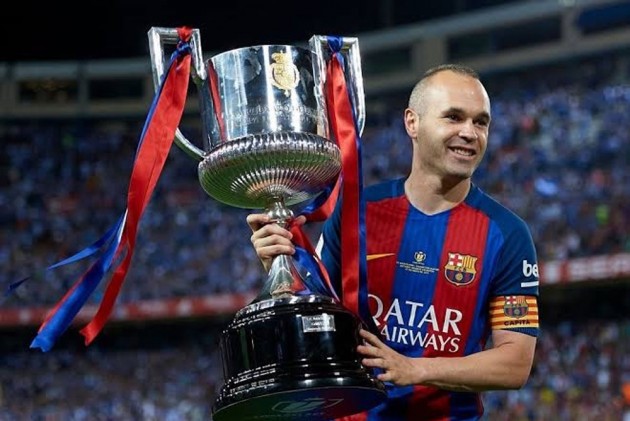 Picking out the best bits from the career of Andres Iniesta is rather like trying to get the ball off him. It's damnably difficult. (More Football News)

Still, to mark the former Spain and Barcelona star's 36th birthday, we have selected 10 truly top moments from one of the 21st century's finest footballers.

These have been chosen from among his career highlights with Barca and the national team, so, Vissel Kobe fans, we must apologise.

Enjoy a stroll down memory lane to look at 'The Artist' and his finest work...

Iniesta later admitted his "blood was boiling" when he learned he was on the bench for the 2006 Champions League final against Arsenal.

With Barca 1-0 down at half-time, Frank Rijkaard moved to rectify that error by introducing the midfielder for Edmilson. It proved pivotal.

Fellow subs Henrik Larsson and Juliano Belletti, along with Samuel Eto'o, might have provided the telling touches to secure a 2-1 victory, but it was Iniesta's arrival that catalysed the comeback. Future team-mate Thierry Henry, who was in that Arsenal side, recalled: "The person who really killed me was Andres. When he comes on, everything changes."

Chelsea fans might remember this Champions League semi-final second leg for a string of questionable refereeing decisions, but there is one moment that will forever stay with Barca fans.

The Catalans were moments from going out to a Michael Essien strike, but Iniesta's thumping effort from outside the box in the third minute of injury time sent them through on away goals.

Barca went on to beat Manchester United in the final and win the treble in Pep Guardiola's first season in charge. Iniesta's goal made it all possible.

Iniesta recalled his winning goal in extra time of the 2010 World Cup final as a moment of clarity, when it seemed as though the world drifted into slow motion.

That feeling of calm was a far cry from the year leading up to the tournament, in which the player struggled badly with mental and emotional concerns despite his success on the pitch. "It was like nothing was right," he recalled in his book, The Artist: Being Iniesta.

The loss of his friend Dani Jarque in 2009 - the Espanyol defender who died at just 26 years old - had deeply affected Iniesta, and it was only fitting he celebrated securing Spain's first World Cup by pulling off his shirt to reveal a message beneath reading: "Dani Jarque, always with us."

Guardiola's Barca reached their peak in 2010-11 and arguably their greatest performance came in November 2010 against Real Madrid.

Jose Mourinho's first taste of the Clasico as Madrid coach ended in a 5-0 battering at Camp Nou in which Iniesta, Xavi and Sergio Busquets utterly dominated proceedings.

He was not among the goals - Xavi (from Iniesta's pass), Pedro, David Villa (twice) and Jeffren were on the scoresheet - but Iniesta's display underlined his position as one of the world's best midfielders in the finest team on the planet.

Alex Ferguson famously compared facing a midfield of Xavi and Iniesta to being stuck on a carousel after Barca beat United 2-0 in the 2009 Champions League final.

Two years later, Guardiola's men led the Red Devils on an even dizzier dance, winning 3-1 at Wembley to secure another European triumph. Such was Xavi, Busquets and Iniesta's control over events that even Ferguson could find no complaints over the scoreline.

"They do mesmerise you with the way they pass it," he said. "I would say they're the best team we've faced. Everyone acknowledges that and I accept that. It's not easy when you've been well beaten like that to think another way. No one has given us a hiding like that. It's a great moment for them."

At the 2011 Club World Cup, Barca went into the final against Santos with David Villa injured and Pedro on the bench. Guardiola's solution? Let's midfield them to death.

Xavi, Busquets, Iniesta, Cesc Fabregas and Thiago Alcantara (oh, and Dani Alves) all lined up behind Lionel Messi in a 3-4-3. It gave Barca a grip on the game that never loosened.

Messi (twice), Xavi and Fabregas scored in a 4-0 win in which Barca had 71 per cent possession and a young Neymar was given a glimpse of his future. Iniesta, the beating heart of the side, described the performance as "unique... it was something to remember and enjoy".

Iniesta was part of the Spain side that won Euro 2008 under Luis Aragones before Vicente del Bosque led them to World Cup glory. Two years later, one of the great modern eras of international football was secured as they defended their continental crown, dispatching Italy 4-0 in the final in Kiev.

Del Bosque's team comprised six midfielders and no strikers, a remarkable line-up that represented the zenith of tiki-taka football, where technical mastery of pass-and-move play trumped all else and the classic number nine was rendered obsolete. It was the footballing equivalent of a guitar band deciding guitars aren't cool any more.

Iniesta was named man of the match, player of the tournament, and crowned UEFA's Best Player in Europe later that year.

Another former Barca player in his first season as head coach, another treble, and another Iniesta assist on a big stage.

Luis Enrique's Barca took the lead against Juventus in Berlin through Ivan Rakitic after four minutes, as Iniesta became the first player to assist a goal in three different Champions League finals.

Alvaro Morata equalised but Luis Suarez and Neymar secured a 3-1 victory, as Iniesta claimed another man-of-the-match prize in a major final.

2015: THE SANTIAGO BERNABEU STANDS AS ONE

Iniesta is one of the few Spanish players who is generally admired throughout rival fan bases and territories - even among Real Madrid supporters.

In the Clasico of November 2015, Barca destroyed Madrid on home turf with a 4-0 victory in which Iniesta set up Neymar for a goal and scored a stunner himself.

Such was the supremacy of Iniesta that day - with Lionel Messi out injured - that the Bernabeu gave him a standing ovation as he left the pitch in the 77th minute. Only two other Barca players had ever been accorded such an honour: Ronaldinho, and Diego Maradona.

Iniesta had not yet confirmed he would be leaving Barca at the end of 2017-18, but he made sure to provide the perfect curtain call anyway.

Having played a reduced role for much of the season, Iniesta seemed to have been saving himself for a last hurrah: the Copa del Rey final against Sevilla.

Although nearly 34, he looked at the peak of his powers, dictating the game at his own tempo as Barca cantered to a 5-0 win.

He even scored the goal of the game - exchanging passes with Messi, dummying the keeper and firing home - before yet another ovation serenaded his teary-eyed exit from the last major final he would play for the club he joined as a 12-year-old.