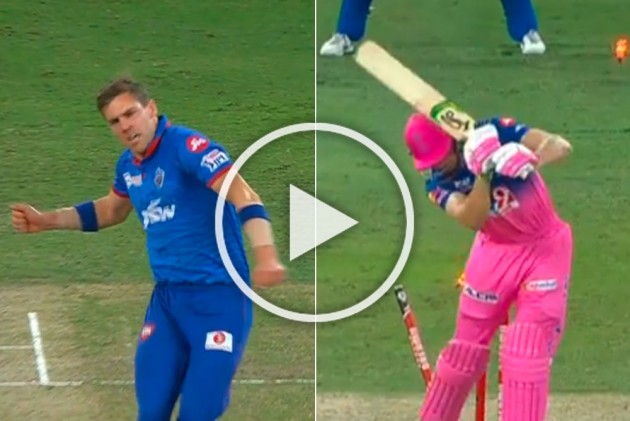 In a sensational display of fast bowling, Delhi Capitals pacer Anrich Nortje on Wednesday shattered the Indian Premier League (IPL) record for the fastest deliveries, not once but twice, during the 30th match of the 2020 season in Dubai, UAE.

After Delhi set a 162-run target, Rajasthan Royals' chase got off to a flier with two English openers -- Jos Buttler and Ben Stokes -- racing to 37 in 2.5 overs. But Nortje provided the breakthrough in one fascinating battle between the bat and ball.

DC skipper Shreyas Iyer introduced Nortje in the third over, only to see Buttler welcomed the right-arm fast bowler with a six over long-on. Then Nortje hit 152.3kph, followed by 152.1kph, both going for singles as Buttler and Stokes rotated the strike.

Buttler hit the next two for fours, by scooping deliveries, clocking 146.4kph and 156.2kph respectively, over short fine leg disdainfully. But the Englishman departed, getting bowled by a 155.1kph delivery, off the last ball of the over.

Moments later, came the confirmation that Nortje had broken compatriot Dale Steyn's record for the fastest delivery in the IPL, that fifth ball of the 3rd over of the RR innings.

For the record, Nortje's IPL stint was only possible after the pull out of Chris Woakes. The 26-year-old was roped in as the replacement for the England all-rounder.