France star Antoine Griezmann reflected on the 1-1 draw at home to Turkey, which denied the country's qualification for Euro 2020. 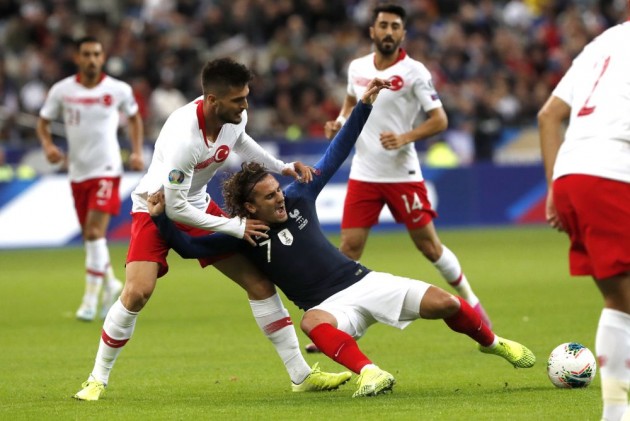 France were denied qualification for next year's European Championships following a 1-1 draw at home to Turkey in Paris.

Substitute Olivier Giroud looked to have booked France's ticket to Euro 2020 with a 78th-minute header, however, the world champions' celebrations were put on hold by Kaan Ayhan's late equaliser.

Reflecting on the Group H stalemate, star Griezmann told reporters: "We are a little sad, a little weird, because we made a great match, one of our best.

"We open the scoring on a corner, but we still took that goal on a set kick, there is a little bit of anger, but we will be calm again. We have to learn from our mistakes, that we are not perfect.

"We had to come back stronger, the coach told us he was happy with us and we had a great match, we still have two games and we have to win them. to win, but it's a shame."

The result left France second in Group H, adrift of leaders Turkey on their head-to-head record after eight matches.

"They had scored a goal in the same way that they did the first game," head coach Didier Deschamps told M6. "We could have avoided it even if it is very well taken shot.

"It was necessary to win in terms of play, opportunities, they had little but they scored on set-pieces. We had enough opportunities, we only scored that goal from Olivier, it could have been decisive.

"We did not win ... When I say that it is the result that counts. We have the same number of points, it is the two best teams in the group. It's always complicated, it's a long road. This team has been very defensive but deserves to have that place too."

Turkey head coach Senol Gunes, meanwhile, added: "One point is already good for us. I congratulate my players. It is very good to return to Turkey as leaders.

"We played against a very strong opponent. They were better than us, they had a lot of opportunities but we made a lot of effort."