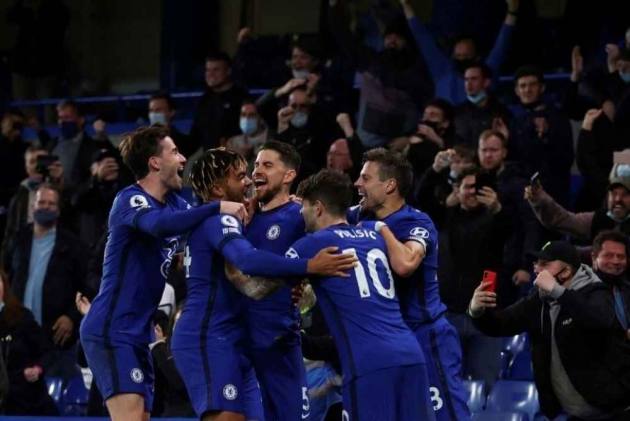 Chelsea boosted their hopes of Champions League qualification with a vital 2-1 victory over Leicester City in the penultimate game of both sides' Premier League seasons. (More Football News)

Thomas Tuchel's men avenged their defeat in Saturday's FA Cup final with a win secured by Antonio Rudiger and Jorginho goals in front of 10,000 fans at Stamford Bridge.

Three points saw the Blues leapfrog their opponents, who netted late on through Kelechi Iheanacho, into third place in the Premier League to keep a top-four finish firmly in their hands going into the last day.

Leicester, meanwhile, now need a Liverpool slip-up if they are to return to the Champions League after a four-year absence.

3 - Each of Antonio Rüdiger's last three Premier League goals have all come against Leicester City, accounting for 50% of his total goal tally in the competition (3/6). Hunter. pic.twitter.com/RE2Uu4NL70

Clearly desperate to make amends for their Wembley defeat, Chelsea made a strong start to proceedings.

Timo Werner was at the heart of it, the German denied what looked a certain penalty when he was kicked by Youri Tielemans before seeing a cool finish rightly chalked off for offside.

And luck continued to evade the striker, who saw another goal ruled out just past the half-hour mark after the VAR spotted he had handled the ball into the net instead of completing a simple header.

For that reason, Chelsea would have felt aggrieved to go in level after dominating a first half that also saw them lose N'Golo Kante to injury.

But they put things right just 94 seconds into the second period when Rudiger bundled home from a flicked-on corner to the delight of a partisan crowd.

Werner's fortune turned shortly after, too, the Blues forward tempting Wesley Fofana into a trip that was upgraded from a free-kick to a penalty on inspection from the VAR.

Jorginho did the job from the spot to seemingly exorcise the ghosts of that FA Cup clash, but there was still time for Iheanacho to set up a nervy finale with a left-footed finish from inside the box.

After Ayoze Perez then passed up a big chance to equalise, Chelsea held out through a feisty finish to stay in charge of the top-four race.

What does it mean? Tuchel's side seize control

Chelsea's victory keeps Champions League qualification in their hands going into the final day of the Premier League season, with a win at Aston Villa guaranteeing them a place regardless of results elsewhere.

As for Leicester, they will get there only if Liverpool drop points in either of their remaining fixtures, with a win at home against Tottenham necessary if they are to capitalise on just a single Reds slip-up.

He may have won a penalty and ended up on the winning side, but somehow this was not a night from which Werner will take great confidence.

The forward took more shots than any other player (four) from just 28 touches and completed all 10 of his passes in the opposition half, but his knack for failing to convert good chances and straying into an offside position almost proved costly in another tight game.

If this season is going to end with Champions League victory over Manchester City, Werner will need to find more consistency in his play.

Jorginho comes to the fore

So often overlooked as a result of the efforts of his usual partner Kante, Jorginho was key to the Chelsea cause again in this one.

The 29-year-old became Chelsea's top scorer in the Premier League this season as he made it seven from the spot and also made more passes in the opposition half (35) than any other Blues player across the 90 minutes.

– With Manchester City, Manchester United and Leicester all failing to win, this was the first day in the Premier League to see each of the sides starting the day in the top three all play but not triumph since January 31, 2017 (Arsenal, Tottenham, Chelsea).
– Chelsea have scored 10 Premier League goals via corners this season, more than any other team. Indeed, the Blues last bagged more goals from corners in a single top-flight campaign in 2016-17 (13).
– Iheanacho is the first player in Premier League history to score a goal on all seven weekdays within a single season.
– Only Leeds United (11) have conceded more goals via corners in the Premier League this season than Leicester (nine).
– No player has scored more Premier League goals in a single campaign with 100 per cent of them coming from the penalty spot than Jorginho's seven this season (level with James Milner in 2016-17).

Chelsea round off their Premier League campaign with the trip to Villa, while Leicester finish up at home against Spurs.