Both the Indian compound archery teams -- mixed and women's -- lost to Colombia in the World Cup finals in Yankton. Lone recurve archer Ankita Bahakat will compete on Sunday. 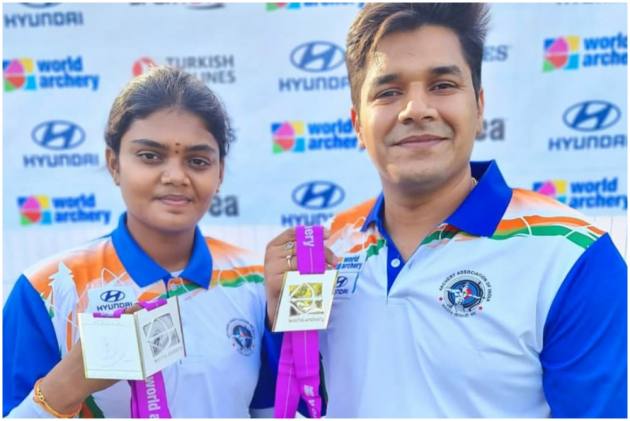 The Indian women’s and mixed pair compound archery teams signed off with silver medals after lop-sided losses to Colombia at the World Championships here. (Other Sports News)

India were in pursuit of their first-ever gold medal at the world event. For a country that doesn’t have gold yet, India have climbed the most podiums at the event – 10 – appearing in eight finals and leaving with a silver each time.

The star Indian mixed pair duo of Abhishek Verma and Jyothi Surekha Vennam, who stood fourth in the ranking round, started off with a one-point lead but thereafter it was a story of Colombian dominance. The Indians went down by a four-point margin (150-154).

The seventh-seeded women’s team of Jyothi, Muskan Kirar and Priya Gurjar, on the other hand, lost by a margin of five points (224-229) against the troika of Sara Lopez, Alejandra Usquiano and Nora Valdez.

The Colombians, who topped the rankings, drilled in 15 perfect 10s with five Xs (closest to the center). Locked 58-58 after the opening end, the Indian women's team failed to snatch a lead shooting twice in the red circle as their opponents gained a one-point advantage.

There was no stopping the Colombians thereafter as they shot eight 10s from 12 arrows in the last two ends to win their third women's title, and first since 2017. In the mixed pair event, India had a poor second end where they shot two 9s and one 8 to squander a one-point lead and lose the match by four points.

The duo of Daniel Munoz and Sara, who stood second in the rankings, consolidated after the first end and shot a perfect 40/40 in the third end to win their first-ever mixed gold medal. Overall, the Colombian pair shot 10 perfect 10s from 16 arrows while the Indians were no match with just eight 10s.

For Colombia, it reasserted their supremacy in compound archery taking their all-time gold medal count at the World Championships to four. India are also in contention for three medals in individual compound events with Verma and Jyothi slated to compete in their respective quarterfinals later on Saturday.

Ankita Bhakat is the lone archer in fray in the recurve competition and she will compete in her last-eight match on Sunday.