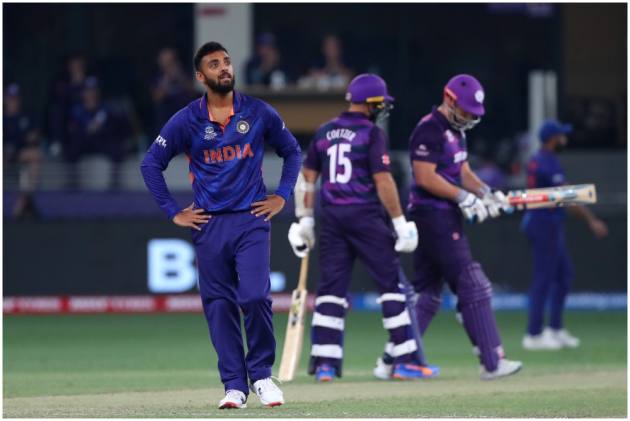 Architect turned mystery spinner Varun Chakravarthy thinks that his captain Virat Kohli is like Dubai's iconic Burj Khalifa, which is the tallest building in the world. (More Cricket News)

The 30-year-old was asked to compare fancy Dubai buildings with India players in an ICC segment. And Chakravarthy played the googlies thrown at him with some witty answers.

"Definitely captain Kohli. That’s (Burj Khalifa) the tallest building. The biggest one," said Chakravarthy while comparing Kohli with the Burj.

“Who reminds you of the Burj Khalifa?”

Varun Chakravarthy compares his teammates to landmarks in the UAE ðÂÂÂÂÂÂÂÂÂÂÂÂï¸ÂÂÂÂ#T20WorldCup pic.twitter.com/y9TGSDMWCs

He was then shown a picture of Burj al Arab. The mystery spinner immediately came up with the name of 'captain cool' Mahendra Singh Dhoni. The former India skipper is currently the mentor of the national team in the ongoing T20 World Cup in the UAE.

"I would compare it to MSD. It's a cool building in the sea."

Hardik Pandya was the easiest choice for Chakravarthy to compare with the Atlantis hotel building. He said the building is "very blingy, blingy". He added, "Hardik wears lots of bling stuff. I’ve been with him for one tour and he likes to dress up nicely."

Chakravarthy was then shown the Dubai Frame building. He compared it with Jasprit Bumrah and said that "the middle stump is missing, the base is intact".

For wicketkeeper-batter Rishabh Pant, the mystery spinner picked Cayan Tower as the most suitable building.

"I’ll go with Rishabh for the Cayan tower because he twists himself when he plays the slog sweep… that’s how he looks playing that shot."

Chakravarthy then compared the Museum of Future building with Suryakumar Yadav.

“When he expresses himself, he’s a treat to watch."

He then compared the Aldar Headquarters building in Abu Dhabi, which is a fully-glazed structure completely circular in elevation and curved in all other directions, with fast bowler Mohammad Shami.

"Because when he bowls, he presents the seam as straight as possible like this one (building)," he said.

Lastly, when he was shown the image of an under-construction building next to the Cayan Tower he immediately named himself saying "probably trying to make a career (in cricket)".