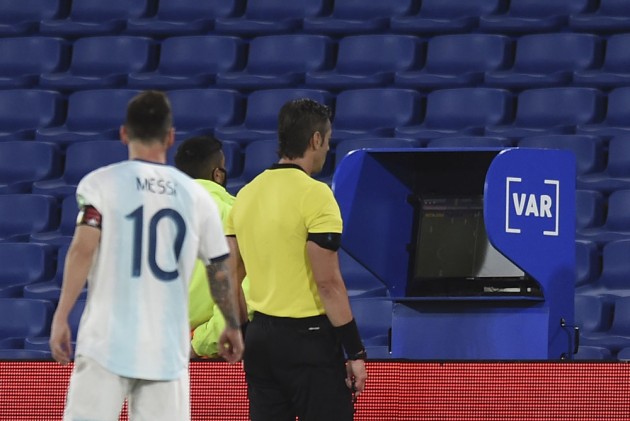 Lionel Scaloni called for greater consistency with the VAR after Argentina were denied a winner against Paraguay. (More Football News)

Nicolas Gonzalez cancelled out Angel Romero's penalty at La Bombonera on Thursday and Argentina thought they had a third straight win to begin World Cup qualifying when Lionel Messi scored in the second half.

However, the goal was ruled out after a VAR check for a foul that started Argentina's passing build-up, and Scaloni's men were held as they moved onto seven points from three World Cup 2022 qualifiers.

But the Argentina coach wants to see greater consistency from the VAR after his side were denied a winner.

"I think that in some way it is necessary to seek to unify the issue of the VAR," Scaloni told a news conference, via Argentina's Twitter.

"I am not talking in good or bad faith, but to unify criteria."

After a slow start, Argentina dominated following Romero's opener from the penalty spot for Paraguay.

Argentina have won just two of their past eight qualifiers against Paraguay, who held on for a point in Buenos Aires.

Scaloni was satisfied with his team's performance and said they were dominant for long periods.

"In the first 15 minutes the team did not go well. After the penalty I think it was all ours, honestly," he said.

"The team reacted, created situations, did what it had to do. We achieved a draw."

Scaloni added: "We are leaving with a bittersweet taste because Argentina did everything to win.

"In the second half, we put the rival behind. We must also value the attitude of the team, which always believed in achieving victory."

Argentina continue their qualifying campaign with a trip to Lima to face Peru on Tuesday.