In his comeback match after a doping ban, Prithvi Shaw made a stroke-filled 39-ball 63 to help Mumbai thrash Assam by 83 runs in a Syed Mushtaq Ali Trophy game 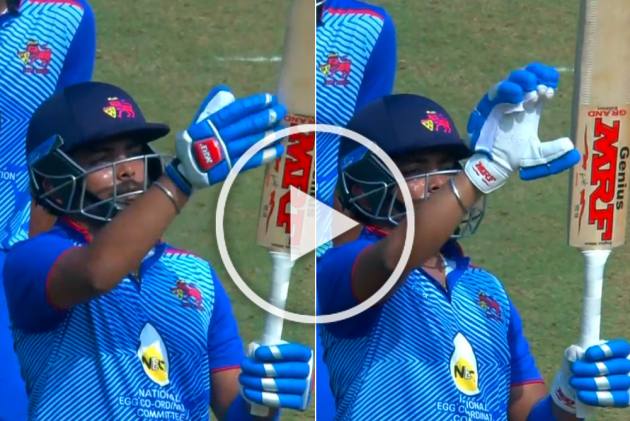 Returning to competitive cricket after serving a doping suspension, young Prithivi Shaw said he's now completely focused on letting his bat do the talking to force his way back into the Indian team. (More Cricket News)

"Now I will focus on scoring as many runs as possible and win games for the team," said Shaw, who played his first game after serving a backdated eight-month suspension by the BCCI for failing a dope test.

In his comeback match, Shaw made a stroke-filled 39-ball 63 to help Mumbai thrash Assam by 83 runs in a Syed Mushtaq Ali Trophy game.

Well, that 'bat doing the talking' part has forced fans to question the 20-year-old's attitude. Watch the video here:

The celebration reminded many of India captain Virat Kohli's 'talking bat' act.  So, what do you think

This is the problem with the young players. Coming Back from a ban, scoring a half century against a relatively weaker bowling attack, and then making gestures. They need to learn to be humble. This over confident kid won't last long in the international arena. MARK MY WORDS!

What is this gesture from prithvi..all the problems are his doing ..whom is he signalling #asksportstak @vikrantgupta73

Against Asam and attitude omg. Definitely got many ducks in international while making a comeback ðÂÂÂÂÂÂÂÂÂ. When bat speak no need to tell anything by mouth.

Shaw is so overrated. Shaw is the next Kambli. He will throw it away with this kind of poor attitude and arrogance.

Oh! What a celebration ðÂÂÂ¤£

After pumping terbutaline to increase muscle strength, he's doing this celebration after scoring a 50 against Assam
Top attitude should definitely play for India soon

Lol having a MRF bat doesn't make him kohli.. Trying to imitate him.. Doesn't suit for his kid face.. ðÂÂÂ¤£ðÂÂÂ¤£

Another Vinod Kambli on the block. By the attitude & lifestyle looks like @PrithviShaw will have same fate as of VinodKambli. Talented player but can’t digest sucrose. Need to learn from @sachin_rt & @msdhoni how to handle success.

"I will just keep scoring runs. It is all about the selectors and what they think. My job is to score runs and win games for the team," the 20-year-old opening batsman said when asked about his return to the national team.

Shaw, who made a dream Test debut with a century and a fifty in the two matches he has played so far, has no other option but to pile up tons of runs to reclaim his Test spot as Rohit Sharma and Mayank Agarwal have grabbed their chances in his absence.

Shaw was banned from all forms of cricket by the BCCI for a (retrospective) period of eight months in July after failing a dope test during the Mushtaq Ali Trophy in March and his ban ended on Friday.

Talking about the ban period, Shaw said the episode was definitely "hard and upsetting" but it is a thing of the past now.

"I had never thought that something like this would happen. I was obviously upset. For the first 20-25 days after I was banned, I was not able to understand how did it happen," he said.

"Time passed by. I went to London and chilled out there as I was not allowed to practice till September 15. After that I stabilised myself and kept myself mentally stronger by telling myself these three months would pass. But each day was hard, it was getting longer. It's all past now."