Youssef El-Arabi scored yet again against Arsenal, but his strike was not enough to inspire a comeback for Olympiacos at Emirates Stadium. 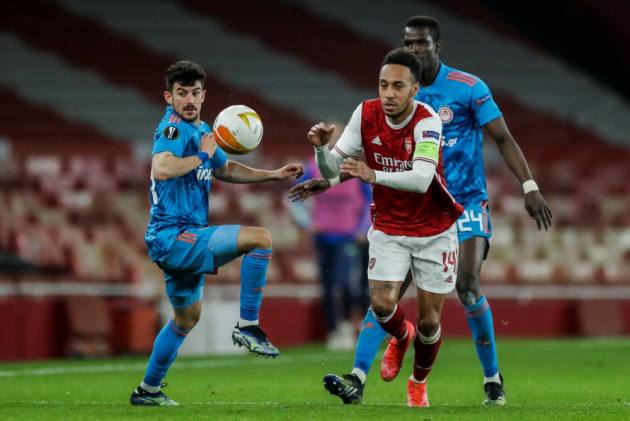 Arsenal survived a second-half scare to book their place in the Europa League quarter-finals despite a 1-0 defeat to Olympiacos.  (More Football News)

With a 3-1 cushion from the first leg, Arsenal managed to exorcise the demons from their round-of-32 defeat to the same opponents a little over a year ago, but it was tighter than they would have wanted.

Youssef El-Arabi scored the crucial goal for Olympiacos last season, and he was on target again to put the visitors ahead on the night on Thursday.

4/5 - Arsenal have made it to the quarter-finals for the fourth time in their last five Europa League/UEFA Cup campaigns (knocked out at Last 32 stage last season), after failing to reach that stage in each of their first five attempts. Relief. #UEL

Back on his former stomping ground, Sokratis was in the thick of the action inside five minutes, bravely blocking Emile Smith Rowe's effort, with both players requiring treatment.

Sokratis got a vital touch to take Nicolas Pepe's effort wide soon after, though some typically slack Arsenal defending saw the hosts caught cold from one long ball, with Bernd Leno denying El-Arabi.

Back in the fold after his north London derby omission, Pierre-Emerick Aubameyang snatched at a similarly good chance at the other end, prodding over when one-on-one with Jose Sa.

Yet Arsenal's luck ran out in the 51st minute, El-Arabi's strike deflecting in off David Luiz after Dani Ceballos had lost possession.

Pepe's blistering first-time shot looked set to restore Arsenal's cushion in the tie on the hour, omly for Smith Rowe to inadvertently get in the way.

Aubameyang's frustrating evening was summed up by a dreadful chip late on, though Arsenal were ultimately not made to pay for his profligacy.

Ba's dismissal helped, the defender receiving a ridiculous second yellow for punching the ball away in frustration after he had fouled Gabriel Martinelli.

What does it mean? Olympiacos’ happy hunting ground, but Arsenal get it done

Arsenal have now progressed from six of the seven Europa League knockout ties in which they won the first leg – their only failure coming last season against Olympiacos.

The Greek team were the better side on the night here, though they were also helped by wasteful finishing from Arsenal, who have now lost each of their three home games against Olympiacos. It is the first time the Gunners have lost three consecutive home matches against a single opponent in European competition.

At the other end of the pitch, Aubameyang cut a frustrated figure. The Arsenal captain missed a gilt-edged chance in the clash at the Emirates last term, and his finishing was similarly wasteful this time out, with the Gabon forward squandering three brilliant opportunities in the closing stages.

After his error in the first leg, no player had made more mistakes leading to a goal in this season's Europa League than Ceballos, who was again sloppy on the ball in the build-up to Olympiacos' opener.

From then on, Arsenal's defending left a lot to be desired. The Gunners have now conceded in each of their last 11 matches across all competitions – their longest run without a clean sheet since a stretch of 14 matches without a shut-out between October and December 2019.

- Arsenal have made it to the quarter-finals for the fourth time in their last five Europa League/UEFA Cup campaigns, after failing to reach that stage in each of their first five attempts.

- Olympiacos have failed to reach the quarter-finals in any of their 23 Europa League or UEFA Cup campaigns.

- Arsenal games have produced seven red cards this season in all competitions (five for Arsenal players, two for the opposition), the joint-most of any Premier League side (also seven in Aston Villa games).

After their win over Tottenham last weekend, Arsenal have another London derby in store on Sunday, as they travel to West Ham. Olympiacos take on Aris in Greece's top-flight play-offs.