Nicolas Pepe looked to have won the game for Mikel Arteta's men but Slavia Prague bounced back in Thursday's first leg. 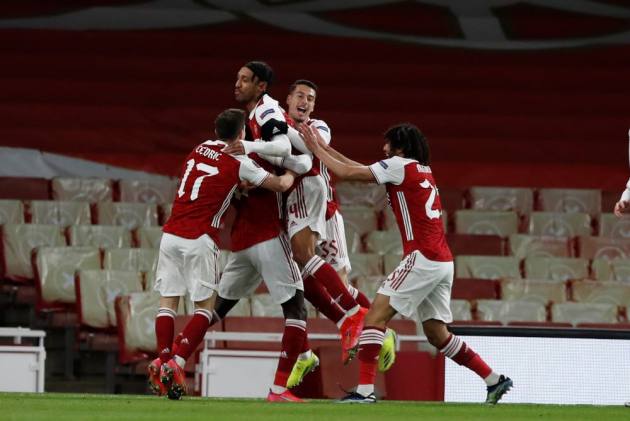 Tomas Holes scored in stoppage time to deny Nicolas Pepe the glory of a late winner as Slavia Prague snatched a 1-1 draw at Arsenal in the first leg of their Europa League quarter-final. (More Football News)

Pepe looked to have won the game for Mikel Arteta's men when he finished clinically after being played through by fellow substitute Pierre-Emerick Aubameyang with four minutes of normal time remaining.

But Czech champions Slavia, who knocked out Leicester City and Rangers in the previous two rounds, showed their resilience once again in Thursday's clash at Emirates Stadium as Holes swooped in the third added minute to head a precious away goal.

Arsenal twice hit the post with the game scoreless, with Alexandre Lacazette failing to convert when clean through on goal, but they now head into next week's reverse fixture in Prague needing to score at least once to avoid elimination.

4 - Nicolas Pepe has scored more goals (4) than any other Arsenal player in the Europa League this season. Super. #UEL pic.twitter.com/ysTBYB33wM

Bukayo Saka curled wide for the home team in the first half, while Rob Holding had a header tipped over the crossbar by Ondrej Kolar.

Willian went a step closer by bending a 20-yard free-kick against the outside of the post early in a second half that got better as it went on.

Bernd Leno made a rare save from Jan Boril's deflected shot, but it was Arsenal who continued to look the more likely to score as Lacazette wasted a glorious opportunity.

The French striker stole the ball off Oscar Dorley and had half the length of the field to run with nobody around him, only to fire his shot against the bar with only Kolar to beat.

Lacazette was unable to guide in a Saka cross at full stretch soon after and Aubameyang fired wide once teed up by Emile Smith Rowe just 41 seconds after being introduced.

Pepe finally found a breakthrough for Arsenal when latching onto Aubameyang's prodded pass and dinking the ball over Kolar, but Arsenal's celebrations were short-lived.

A corner into the Arsenal box deflected off Pepe's leg and fell into the path of centre-back Holes to head past Leno, who got his hands to the ball but could only push it into the roof of the net.

What does it mean? Slavia eyeing another scalp

Slavia, now unbeaten in 22 games, will be the favourites of many to advance thanks to Holes' late equaliser in London.

The Czech giants showed against Leicester and Rangers in the previous two rounds that they should not be written off and Arsenal now face a make-or-break tie in Prague next Thursday.

Arteta's men need to score and cannot be as profligate as they were today, finding the target from just two of their 11 attempts and scoring from one of them. A clean sheet is also going to be important, but it is now 14 games without a shutout for the Gunners, their longest such run since December 2019.

Pepe shows Lacazette how it is done

The Ivory Coast international gave wasteful Arsenal a late lead with a calm finish eight minutes after being introduced, making it four goals and three assists for him in this season's Europa League - the most goal involvements of any Gunners player.

That came from Pepe's only attempt, whereas Lacazette had four shots - including the one-on-one in which he had ample time to pick his spot - and found the target from just one of those.

Arsenal were on the brink of a first clean sheet in any competition since drawing 0-0 with Manchester United at the end of January. Yet again they crumbled defensively, though, with Pepe failing to deal with the late corner and Leno unable to keep out Holes' header despite getting hands to the ball.

- Arsenal remain unbeaten in their nine European meetings with Czech opponents (W7 D2). However, this was the first time they have failed to win a home game against a side from the Czech Republic.

- Having lost their first three away games against English sides without scoring, Slavia have been beaten just once in their last four such games in European competition (W1 D2), finding the net each time.

- Aubameyang's assist for Arsenal was his 100th goal involvement in all competitions for the club (84 goals, 16 assists).

- Slavia's Holes scored his first goal in major European competition, in what was his 14th such appearance.

Before the sides reconvene for the second leg next week, Arsenal travel to Sheffield United in the Premier League on Sunday, the same day that Slavia host city rivals Sparta Prague in the Czech First League.