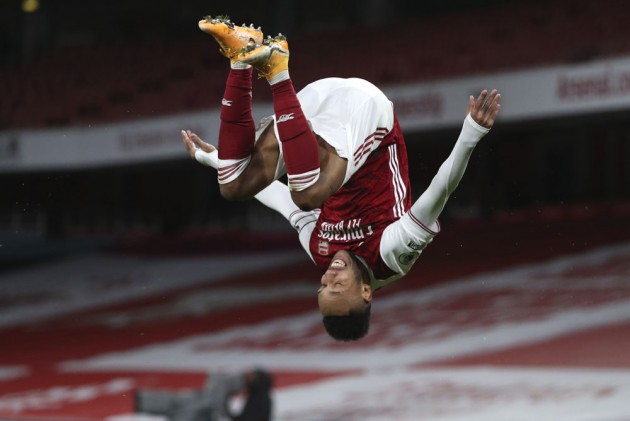 Pierre-Emerick Aubameyang maintained his fine scoring record against Newcastle United as Arsenal continued to climb the table with a 3-0 win at Emirates Stadium. (More Football News)

Gunners captain Aubameyang has endured a testing season along with his team-mates but enjoys facing Newcastle, scoring in each of the sides' previous three meetings heading into this game - including vital openers in both Premier League encounters last season.

That trend continued on Monday with the breakthrough goal five minutes after half-time and a clinching third 13 minutes from the end as Arsenal picked off a Newcastle team showing eight changes but little improvement from their defeat at Sheffield United.

Arsenal should have led after 15 minutes when Karl Darlow blocked Saka's low shot with his right boot but directed the ball only as far as Aubameyang, who hit the crossbar rather than the back of an empty net from a tight angle.

Aubameyang missed the target again under pressure from a retreating Andy Carroll and soon tallied his 10th consecutive attempt without scoring in the league, also seeing a deflected cross clip the post before the break.

Darlow got down to make a strong one-handed save from Alexandre Lacazette at the start of the second half but was soon beaten as Aubameyang finally got his goal, driving beyond the goalkeeper at his near post as Arsenal countered following a Newcastle corner.

Another break from another aimless visiting attack set the stage for the second on the hour mark, with Emile Smith Rowe able to run at Jamaal Lascelles and cut a low cross back for Saka to sweep in.

Newcastle, facing a ninth game without victory, were grateful to Darlow for a brave block as Lacazette headed goalwards, yet it was merely another temporary reprieve as Aubameyang completed the scoring, benefiting from a favourable VAR check as Cedric Soares kept the ball in play.

What does it mean? Arsenal make hay again

Arsenal look to have turned their season around, even if their play can remain plodding on occasion. They made hard work of the first half, although still offered more than in the goalless draw with Crystal Palace last week.

But despite Steve Bruce's stern words of warning for Newcastle after losing to Sheffield United, the visitors performed far below the middling standard set in an FA Cup tie at Arsenal earlier this month when they should have won and were beaten in extra time.

The Gunners stayed patient here and capitalised on poor defending, with the past 11 goals in this fixture now all having been scored after half-time - and all having been netted by Arsenal.

Aubameyang is not the only Arsenal player who likes to see Newcastle visit. Smith Rowe broke the deadlock when the sides met at Emirates Stadium in the cup, having seen an earlier red card overturned.

The 20-year-old midfielder was outstanding on Monday, creating a game-high four chances - including an assist - as well as recovering possession on eight occasions.

2 & 5 - Emile Smith Rowe has either scored (2) or assisted (5) in seven of his 10 appearances for Arsenal in all competitions this season, whilst the Englishman has provided two more assists than any other player for the Gunners this campaign (5). Returns. #ARSNEW pic.twitter.com/SWmWx4BAfq

The defending for Arsenal's first two goals was awful, but they each arrived after Newcastle attacks broke down, with Bruce's 4-4-2 - ambitious on paper - lacking any sort of creative spark and so coming unstuck in the final third.

Jonjo Shelvey, who found a team-mate once from four crosses, and Emil Krafth, who failed with all four attempts, were particularly guilty of wasting presentable opportunities. It was fitting therefore that their respective deliveries led to the decisive counters.

- Arsenal have kept five consecutive clean sheets in all competitions for the first time since February 2009 (six in total in that run).
- There were just nine days between this win and Arsenal’s 2-0 FA Cup victory against Newcastle at the Emirates on January 9, the shortest gap for the Gunners between home wins against the same opponent since January 2008, when they beat Newcastle twice at the Emirates in the space of three days.
- Pierre-Emerick Aubameyang made his 400th appearance in European league football (Arsenal 102, Borussia Dortmund 144, Saint-Etienne 87, Monaco 19, Lille 14 and Dijon 34).
- Aubameyang has either scored (five) or assisted (two) in six of his seven games against Newcastle in all competitions, finding the net in each of his last four against the Magpies.
- Only Nicolas Anelka (30), Cesc Fabregas (28) and Theo Walcott (12) have been involved in more Premier League goals for Arsenal as a teenager than Bukayo Saka (11 - five goals, six assists).

Arsenal's cup victory over Newcastle means they will travel to the winner of Tuesday's tie between Southampton and Shrewsbury Town on Saturday. The Magpies are in league action at Aston Villa.