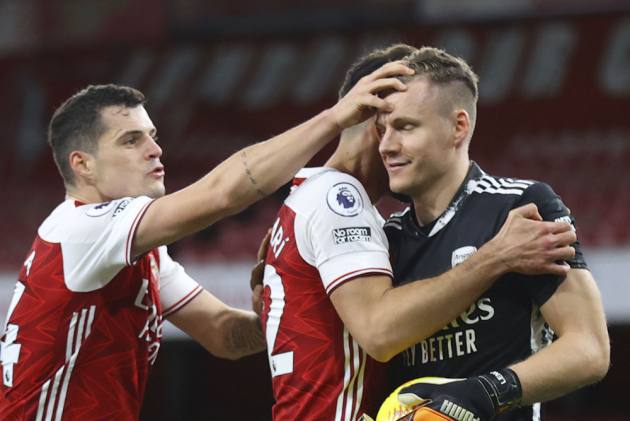 Arsenal survived a late scare to end their winless run in the Premier League as Mikel Arteta's much-maligned side claimed a thoroughly deserved 3-1 victory over Chelsea. (More Football News)

The Gunners headed into the Boxing Day clash at Emirates Stadium having lost five of their last seven Premier League matches, yet were worthy winners against Frank Lampard's hapless team to mark the one-year anniversary of Arteta's first game in charge in style.

Alexandre Lacazette's penalty put Arsenal ahead in a league game for the first time since a win over Manchester United on November 1, and a stunning Granit Xhaka free-kick doubled their tally.

Bukayo Saka then embarrassed Edouard Mendy early in the second half though, after Tammy Abraham's VAR-awarded goal, Arsenal ultimately had to rely on Bernd Leno's save from Jorginho's penalty to prevent a nervy finish.

That meant Chelsea were condemned to a third defeat in four league games.

Saka set the tone early on, getting in behind and crossing for Gabriel Martinelli, who volleyed wide.

Chelsea seemed to have asserted authority when Mason Mount's free-kick clipped the post, yet Arsenal were ahead in the 34th minute, as Lacazette sent Mendy the wrong way from the spot after Reece James was adjudged to have fouled Kieran Tierney.

While Lacazette became Arsenal's leading scorer, the Gunners' second came from an unlikely source – Xhaka curling in a sublime 25-yard free-kick on the stroke of half-time.

Lampard introduced Callum Hudson-Odoi and Jorginho at half-time, but it was Arsenal who struck again 11 minutes after the restart.

Having cut into the area, Saka spotted Mendy off his line, and floated in an audacious – perhaps accidental – effort in off the left-hand upright.

Chelsea made their fortune count when Abraham chested in Hudson-Odoi's cross, and Arsenal’s nerves were fraught when Pablo Mari felled Mount in the box.

Yet Jorginho, who has now missed two of his last four penalties, failed to tee up a grandstand finish – Leno diving to his left to hold onto a weak shot.

What does it mean? Belated Christmas cheer for Arteta

With Gabriel isolating due to a close COVID-19 contact, David Luiz and Willian both ill – though the duo tested negative for coronavirus – and Pierre-Emerick Aubameyang not deemed fit enough to start, Arteta was almost forced to rely on inexperience on Saturday.

It paid off in comprehensive fashion – Saka and Martinelli were supreme down both flanks, while Smith Rowe created two chances, including the assist for Arsenal's third goal, in a free role off Lacazette. The Gunners are now up a place to 14th, while Chelsea sit sixth.

Arsenal gunning for the Blues from distance

With his superb effort, Xhaka became the first Arsenal player to score a direct free-kick versus Chelsea in the Premier League since Thierry Henry in December 2004.

Arsenal have also scored 13 Premier League goals from outside the box against Chelsea – against no side have they netted more in the competition (also 13 v Southampton).

Lampard has consistently stood by Timo Werner, despite the Germany international's recent struggles in front of goal. However, after an insipid first-half display in which he managed two attempts on goal – neither finding the target – and played one key pass, the forward was taken off at the break.

Werner has now failed to score in his last 10 games in all competitions, his longest drought since a run of 12 matches between March and September 2016 across spells at Stuttgart and RB Leipzig.

- Arsenal have now won each of their last 10 home Premier League matches on Boxing Day, the second-best run in the competition's history after Manchester United won 12 in a row between 1997 and 2016.
- The Gunners recorded their first win in eight Premier League matches, and their first at the Emirates since a 2-1 win over Sheffield United back in October (D1 L4).
- Chelsea have lost each of their last three away games in the Premier League, their worst run since February 2019.
- Arsenal netted more than once during the first half of a Premier League game for the first time this season, leading by at least two goals at the interval for the first time since a 3-2 victory over Watford in July.
- Since the start of last season, Abraham (21) has scored more than twice as many Premier League goals for Chelsea than any of his team-mates (Giroud, Pulisic, 10).
- Of all Arsenal players to score at least five Premier League goals, Xhaka has scored the highest ratio from outside the box (78 per cent: 7/9).

Arsenal go up against fellow strugglers Brighton and Hove Albion in three days' time, while Chelsea will look to bounce back when they host in-form Aston Villa on Monday.