Arsenal Picture 'Looks Much Better' After Another Win - Mikel Arteta 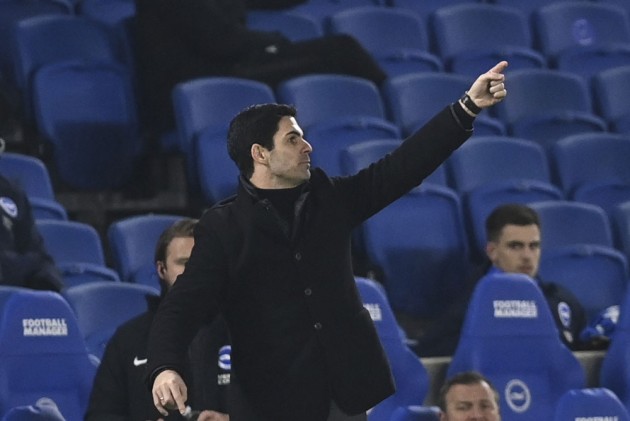 Mikel Arteta and Arsenal are enjoying "a different world, a different story" after winning for the second time since Christmas away at Brighton and Hove Albion. (More Football News)

Talk of a potential relegation battle was building prior to the Boxing Day clash with London rivals Chelsea, but Arsenal ran out 3-1 winners at Emirates Stadium.

Although the Gunners were unconvincing on Tuesday as they turned their focus to Brighton, another three points took them nine clear of the bottom three and up to 13th.

It is the first time since the opening two matches of the season Arsenal have won two in a row in the Premier League, although the clean sheet was their fourth on the road this term - trailing only Aston Villa (five) in that regard.

Manager Arteta is now targeting consistency as his side next visit West Brom, beaten 5-0 at home by Leeds United on Tuesday.

He told Amazon Prime Sport: "We know that we've been struggling with results recently.

"The fact that we won against Chelsea was a big boost, because I think that it was more related to results than performances.

"To come here three days later and get another win for us is massively important. As well, I think we did it in a convincing way in the second half.

"We played much better, but at the end, in the Premier League, you have to hang on in the last few minutes. I'm proud of the boys and happy for the result.

"The best medicine is wins. When you are lacking, whatever it is, you win a football match and it is a different world, a different story. The picture looks much better at the moment.

"We just need to have that consistency. We go against West Brom now and try to win again."

Having endured a seven-match winless run prior to the Chelsea game, Arteta was impressed with the way Arsenal remained positive heading into the festive fixtures.

"When you lose the amount of games we did recently, to maintain the spirit high is a big challenge," he explained. "I think we have managed to do that.

"We have made some decisions - of course, you have to in this period. We have some young kids who are helping, but as well, I must say, the senior players have been spot on to try to balance the energy.

"The frustration when you get defeats can be really damaging."

It was Alexandre Lacazette, one of Arteta's senior stars, who made the difference at Brighton, despite being dropped for fit-again captain Pierre-Emerick Aubameyang.

3 - Tonight is the third time this season that Alexandre Lacazette has opened the scoring in an away Premier League game for Arsenal (also v Fulham and Liverpool); he only did so three times in his first three seasons with the club combined before this. Impact. pic.twitter.com/pjZYQmXTwX

Lacazette scored just 29 seconds after his introduction as a substitute, the fastest Arsenal goal from the bench since Opta records began in 2006-07.

The striker has now scored the opening goal in five Premier League games this season, more than any other player, while he has netted in three matches in a row in all competitions.

"You always hope [the changes will have an impact] and Laca's in a really good moment," Arteta said. "He's full of confidence, he's playing well, and we knew we could use him."

Lacazette added: "I'm really happy. When we come off the bench, we need to help the team and today I was lucky on my first touch to score.

"It's good for me and good for the team as well. Bukayo [Saka] gave me a good pass, as I like, so it was good for me."