Arsenal are just four points clear of the relegation zone and on a dismal run, but Frank Lampard was not entertaining talk of the drop 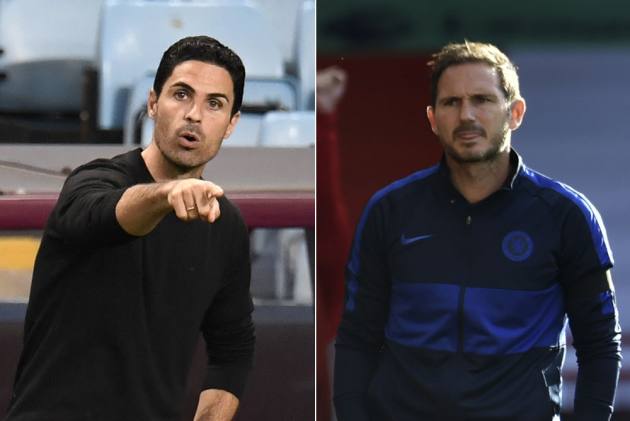 Frank Lampard would not be drawn into discussing a potential Arsenal relegation battle, describing Chelsea's next opponents simply as "a high-quality team". (More Football News)

Arsenal, 13-time English champions, are winless in seven in the Premier League - one shy of their longest run without victory in the competition - and just four points clear of the bottom three in 15th place.

Mikel Arteta's problems are continuing to pile up, with the Gunners exiting the EFL Cup following a 4-1 home loss to Manchester City and former mentor Pep Guardiola on Tuesday.

The fixtures are not getting any kinder for Arsenal, whose 12-match unbeaten Boxing Day stretch will be tested by Chelsea at Emirates Stadium on Saturday.

They then visit Brighton and Hove Albion and West Brom, where further defeats to two sides below them in the table could make a battle against the drop a serious prospect.

"I don't want to talk about what their battle is," Lampard told a news conference before this weekend's match against the side that beat Chelsea in this year's FA Cup final. "They're just a good team with a good manager.

"They've had some tough results recently, but the general wave of the Premier League this season for every team has been a bit more inconsistent than it has probably been in previous seasons.

"My concern isn't where they're at. My concern is at face value, their quality; they're a high-quality team."

4 - Manchester City are the first team to win four consecutive away games against Arsenal in all competitions since Chelsea between 1960 and 1965 (six in a row). Cornered. pic.twitter.com/OcLazrRxlg

Relegated teams like West Ham and Newcastle United have previously been considered 'too good to go down', but Lampard was not interesting in assessing Arsenal's chances.

Lampard expects the prize of a derby win over Chelsea could motivate Arsenal, meanwhile. Two of the Gunners' four wins this term have come against London rivals in Fulham and West Ham.

"When you play a derby, form does go out the window," the Blues coach said. "Sometimes the idea of playing a derby is the spur that the team needs to try to get a result.

"We have to expect the best Arsenal, which is a really good footballing team with really good players, well coached, rotations in their team, lots of threats in attacking areas.

"That's what I expect, so we have to prepare for that."

Reece James and Ben Chilwell are both doubt and Hakim Ziyech will not be fit to return, although Lampard is not concerned by the ex-Ajax man's injuries.

"He had an injury in his knee at the start of the season and then he's just had another muscle injury," he added. "You have to wait for it to recover.

"I wouldn't say it's a long-term concern. We hope to have him back in the next week or so and have him offer what he was offering before."

Ziyech has played just 390 minutes across seven games so far in his Premier League career, but he has already scored once and created 12 chances, leading to a trio of assists.