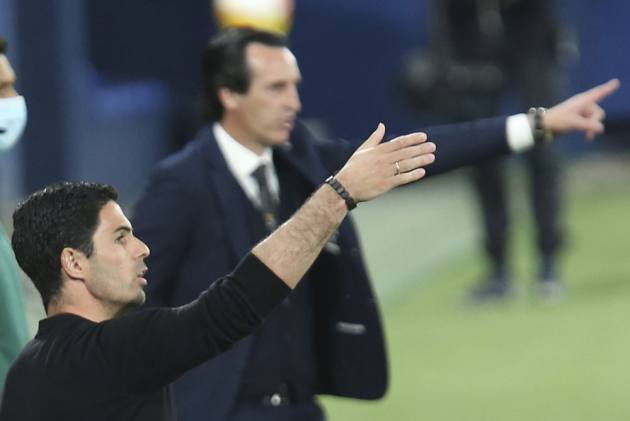 Mikel Arteta has urged his Arsenal players to ignore talk of a possible takeover at the club and "embrace the challenge" of overcoming Villarreal to reach the Europa League final. (More Football News)

The build-up to last week's 2-1 first-leg defeat in Spain was dominated by suggestions that Spotify CEO Daniel Ek is ready to buy out the Kroenke family.

The current owners have faced intense scrutiny in the wake of the Gunners' ill-fated involvement with the proposed European Super League, leading to a large protest two weeks ago.

Thierry Henry this week confirmed Ek has reached out to him, as well as fellow club legends Patrick Vieira and Dennis Bergkamp, to help with the takeover bid.

However, while talk of a possible new era for Arsenal continues off the field, Arteta is only concerned about what happens on it as his side prepare for Thursday's visit of Villarreal.

"We have to try to be away from all the rumours and everything that is happening around the club and focus on the pitch," Arteta said at a pre-match news conference on Wednesday.

"The best way to help the club is to win football matches and be competitive at the highest level."

The work goes on.

More protests are expected at Emirates Stadium ahead of the Villarreal match and Arteta respects the fans' right to express their views.

"I think that they have to be able to do so," he said. "If it's done in a specific way, then they have the right to do it. We have to prepare for the game in the best possible way.

"I wouldn't like to use any excuses. I know that the only purpose of the fans is to defend the club and that they want the best for the team. We will try to do the same."

Nicolas Pepe's penalty, after Manu Trigueros and Raul Albiol had given Villarreal a two-goal lead in the first leg, ensures that it is all to play for in the return fixture.

Arsenal have progressed from each of their last two European knockout ties where they lost the first leg.

"It's a massive game for everybody but in particular for the club because we are representing the club and our fans and we want to do it in the best way by winning trophies.

"It's a big moment again. Not for me, but for the club and for everything that has happened in the last two years and the last months.

"So I think it will be really important and a big step forward if we are able to be in that final and have the opportunity to win that trophy."

Which @Arsenal players will make the difference against Villarreal?#UEL pic.twitter.com/pmOlVKg2fn

Arsenal are relying on the Europa League to salvage their campaign, with a place in next season's Champions League their reward if they win the competition.

Not since 1995-96 have Arsenal failed to qualify for European competition of some sort, and Arteta has acknowledged the importance of keeping that run going.

"Not being in the Champions League is not something we want, but it's the reality. A lot of things have happened and the level has been raised to an unprecedented level," the Arsenal boss said.

"Nobody accepts the situation as it is. We want to change it straight away and this season we have the chance to change it [by winning the Europa League]."

Asked if this could be the last opportunity for the current group of players to win a trophy together, Arteta said: "I don't want to think like that.

"I want to think my players always have the hunger to win any competition. It's true for some players it might be the last season for different reasons.

"I can see how much it means for them and how much they want it."

Arsenal have lost just one of their 11 knockout games with Spanish opponents at home, with that loss coming against Barcelona in the Champions League last 16 in February 2016.

However, Villarreal have progressed from 15 of their 16 two-legged ties in major European competition when winning the first leg - the only exception being the 2016 Europa League semi-final when losing to Liverpool.

Arteta is monitoring the fitness of Pierre-Emerick Aubameyang, Kieran Tierney, David Luiz and Alexandre Lacazette ahead of Thursday's second leg, while Dani Ceballos is suspended after being sent off in the reverse fixture.