AS Roma Relishing Manchester United Meeting: We Have To Beat Those Who Are Great 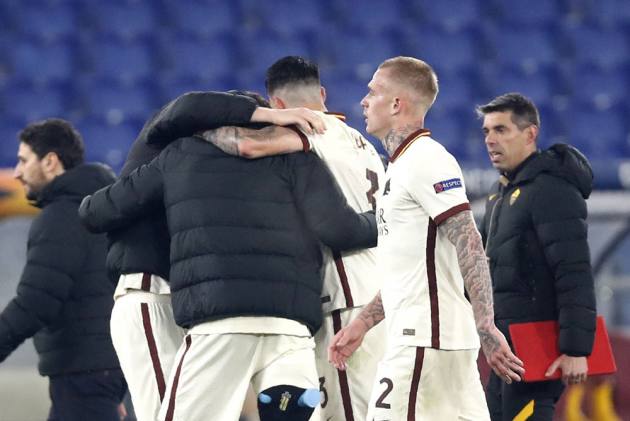 Roma are ready to step up to the challenge of taking on Manchester United in the semi-finals of the Europa League despite an unconvincing display against Ajax. (More Football News)

Serie A side Roma reached just their second Europa League/UEFA Cup semi-final with a 1-1 draw at home to Ajax on Thursday.

That result was enough to advance 3-2 on aggregate following an away win in the first leg, but Roma were made to work by the Eredivisie giants, who dominated 71.7 per cent of the possession.

Roma trailed to Brian Brobbey's second-half strike, although Edin Dzeko eased nerves slightly in the Stadio Olimpico with his equaliser 18 minutes from time.

Roma captain Lorenzo Pellegrini told Sky Sport: "We showed tonight that we're growing. We're happy but we can't get too euphoric; this is only the semi-final.

"We want to play three more games in this competition - we'll have to improve in order to do so.

"Now we face Manchester United. We realise that if we want to do something great, we have to beat those who are great."

Who will contest the final in GdaÅÂ sk? #UEL pic.twitter.com/WxoEC80WAj

Pellegrini has the Roma armband after Dzeko's row with head coach Paulo Fonseca saw him stripped of the captaincy.

Dzeko at least has his place back, though, and he became the fourth player to score 30 European goals for the same Italian club, following in the footsteps of Alessandro Del Piero (at Juventus) and Filippo Inzaghi and Andriy Shevchenko (both at Milan).

The Bosnian striker netted with his only shot on target and created a further chance for Pellegrini, who led Roma in attempts (three) and key passes (two).

"There have been many ups and downs," Dzeko said. "This season wasn't my best on a personal level for many reasons.

"I don't like looking at the past; what happened has happened, we have to look to the future.

"There are many players here playing their first semi-final and we've got to enjoy it, because playing at Old Trafford doesn't happen every day."

Dzeko at least has some experience of the Old Trafford arena, having won on two of his three Premier League trips as a Manchester City player.

Indeed, the 35-year-old scored four league goals away to United, as well as providing two assists.

Now, Dzeko will return to Manchester with Roma, believing his current side have nothing to fear against the tournament favourites.

"If we're in the semi-final, then of course we can [be at the same level]," he said. "It certainly hasn't been an easy path, as Braga, Shakhtar Donetsk and Ajax were basically the toughest draws we could get.

"Now we are facing another big name, but Roma are a big name, too, and we must give everything to reach the final."