Joe Root's England suffered a 185-run defeat in Manchester, the result meaning Australia - who won the 2017-18 series 4-0 on home soil - hold a 2-1 lead and are already certain to retain the urn 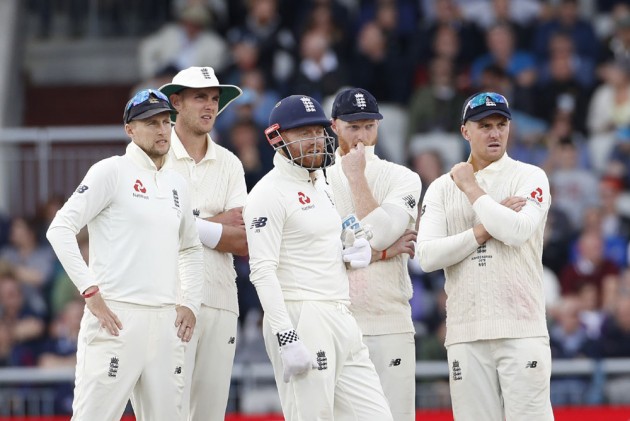 England have named an unchanged 13-man squad for the fifth Ashes Test, despite seeing their Ashes hopes end at Old Trafford on Sunday. But the hosts will assess star all-rounder Ben Stokes's fitness to bowl as they look for a consolation win after failing to regain the Ashes.

Joe Root's side suffered a 185-run defeat in Manchester, the result meaning Australia - who won the 2017-18 series 4-0 on home soil - hold a 2-1 lead and are already certain to retain the urn.

However, rather than swing the axe following the fourth Test result, the selectors have opted to stick with the same group of players as they look to square the five-match series with victory at the Oval.

The show of faith gives a further opportunity to England's misfiring batsmen.

Only Stokes, who made centuries at Lord's and Headingley, the second of which secured a remarkable one-wicket win, and opener Roy Burns average above 40 against Australia's potent bowling attack this year.

Jason Roy retains his place despite making just 110 runs in eight innings. After struggling as an opener, the right-hander was moved into the middle order at Old Trafford, making scores of 22 and 31.

All-rounder Stokes may yet feature as a specialist batsman in the Ashes finale, which begins on Thursday, with England to assess his injured shoulder in the coming days.

The fifth Test will be Trevor Bayliss' last as England coach - the Australian had already announced he would be leaving the role at the end of the series.

An unchanged squad for the final #Ashes Test

The fifth Test will be Trevor Bayliss' last as England coach - the Australian had already announced he would be leaving the role at the end of the series.