Ashes 2019, England Vs Australia: Usman Khawaja Will Bounce Back From Missing Out At Old Trafford, Says Tim Paine

Usman Khawaja has missed out on Australia's squad for the fourth Ashes Test, but Tim Paine expects the batsman to overcome his poor form. 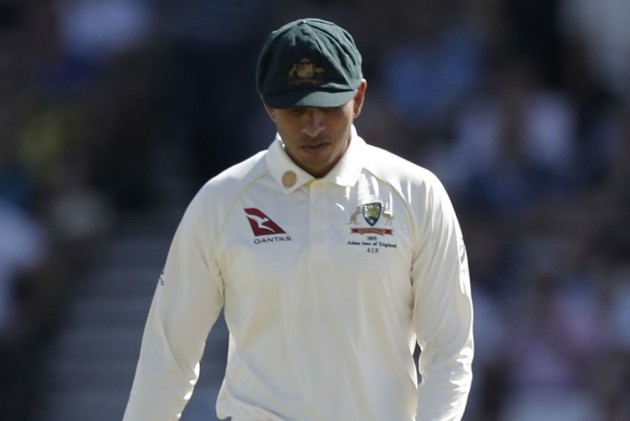 Tim Paine has no doubt Usman Khawaja will recover from a poor run of form that has seen the batsman dropped from Australia's squad for the fourth Ashes Test.

Khawaja has scored a combined 122 runs across six innings so far this series, averaging just over 20 with a high score of 40.

Leading run scorer Steve Smith was absent for Australia at Headingley, as Ben Stokes inspired England to a remarkable one-wicket victory, but the visitors' talisman will return at Old Trafford, with Khawaja the player to drop out.

Marnus Labuschagne seems set to move up to three, with Smith coming in at four, but Paine insists Khawaja – who captained Australia in a tour match at Derby last week – has not been dropped for good.

"Usman is obviously a key player in our side batting at three and he hasn't scored the runs," Paine told a news conference.

"With Steve coming back, it was a tough decision to make on Usman. We think he's still got a lot of cricket left in him, he's got a good Test record over his career and we expect he'll bounce back pretty strongly."

When asked how long Khawaja's place had been under threat, Paine replied: "I'm not sure, I'm not a selector. I give my opinion. It was only spoke about, as far as I'm aware of, this week.

"Usman hasn't scored the runs he would like or we would like, so unfortunately for him Steve missed the last Test and when a player that good comes back someone has to make way.

"It's a good thing for us we've got a player of Usman's quality on the sidelines. It means we're getting our team to where we want to be."

In exactly hours, @root66 will lead out the team for the fourth @Specsavers Ashes Test!  pic.twitter.com/7rBXZ34bTC

While Khawaja will not feature at Old Trafford, Mitchell Starc could be in line to make his return to Australia's bowling attack, having been selected in the 12-man squad.

"Starc bowled superbly last week at Derby, he's got his length right and we’re really pleased at what he did down there.

"He's a great option for us, we think this wicket might suit him. If we make that call we're sure he'll do a great job."

Paine's captaincy has come under scrutiny following the defeat in Leeds, while England paceman Jofra Archer said he believed Australia became complacent in the third Test.

"Jofra's entitled to his opinion, he's had plenty of those before," Paine responded. "We made mistakes, it happens, we've addressed it as a team, spoke about it honestly.

"I was certainly one of those people that made mistakes. It happens in cricket, we're here, we've moved on and ready for this Test match."