Thanks to sturdy knocks for skipper Joe Root and Rury Burns, England managed to thwart off Australian attack on Day 3 of the fourth Test at Old Trafford, Manchester. But Josh Hazlewood, who took four wickets, kept applying the pressure on the hosts. Catch highlights and cricket score of ENG vs AUS here 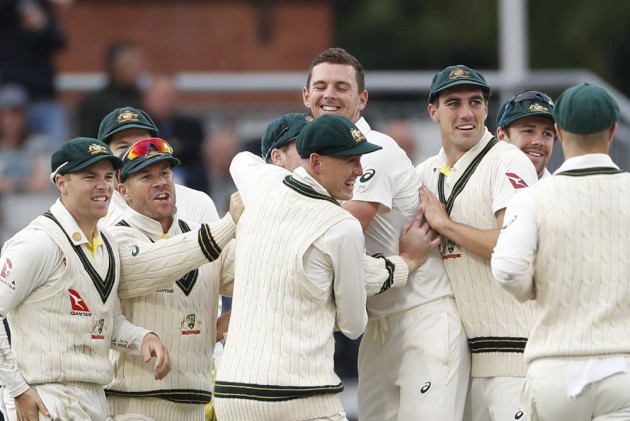 England kept themselves in the fourth Ashes Test match against Australia with some sturdy batting performances from skipper Joe Root and opener Rory Burns. And with some help from fickle English weather, the hosts should be able to play out a draw, even there are still two day's play left in the contest. It's a fact that England can only hope to salvage a draw after Australia declared their first innings three runs short of 500, with a certain Steve Smith scoring a double hundred. Burns (81) lost his overnight partner Craig Overton to Josh Hazlewood early in the day after a delayed start. He then added 141 runs with Root (71) for the third wicket. But quick strikes from Hazlewood, who took all fours wickets on the day, means that England can't still afford to relax. For the Aussies, they can push for a win and for that, they will need to quickly wrap up the England innings. After that, they can decide on the future course of action -- to go for the kill or for the stalk.

Sadly, Steve Smith is unlikely to bat on Day 3 of the fourth Ashes Test between England and Australia at Old Trafford. Given the chance, he will bat for all five days without any complaint and fans will love to see him at work, even at his annoyingly fidgety best or worse, depending on one's perspective. That's what Steve Smith is all about. And he's given everyone yearning for Test cricket. Simply put, this Test match, this Ashes series has been all about the man from Sydney -- scoring runs, setting up rivalries, and even getting injured in the process. Now, he might have landed the knock-out punch to England to retain the urn. Riding on Smith's double hundred, Aussie captain Tim Paine declared their first innings at 467/8, then removed England's promoted opener Joe Denly. As things stand now, Australia are in a prime position to dictate the proceedings. So, what will England do? The hosts will need to find their own 'Smith' to avoid defeat, which currently seems inevitable, and save the series. Or probably, they can pray for more rain.

Catch highlights and cricket score of the Manchester Test between England and Australia here: