Marnus Labuschagne made 103 and Steve Smith scored 93 before Australia's tailenders knocked off some quick runs against England's worn-out bowlers. England then limped to 17/2 in 8.4 overs on Day 2. 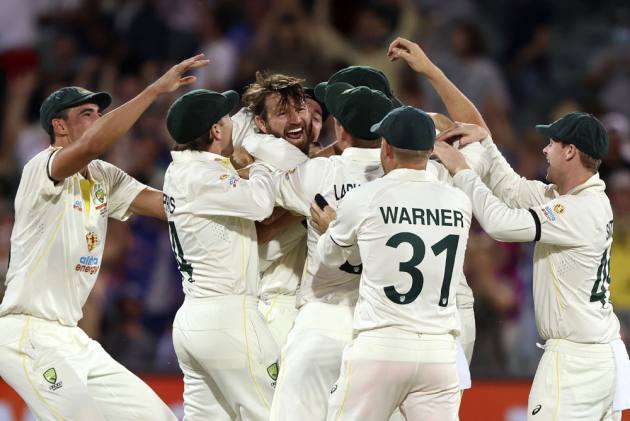 Marnus Labuschagne became the first player to hit three centuries in day-night test matches while captain Steve Smith missed out on a ton as Australia strangled England with a powerful total of 473-9 declared in the second Ashes test on Friday.

Labuschagne made 103 and Smith scored 93 before Australia's tailenders knocked off some quick runs against England's worn-out bowlers and Australia declared after tea.

England limped to 17-2 in 8.4 overs -- still trailing by 456 runs -- before a massive flash of lightning took the players off the field and brought an early closure to the second day's play.

Michael Nesser got a wicket off his second ball in test cricket when he had Haseeb Hameed (6) caught at mid-on after Mitchell Starc had Rory Burns (4) caught in the slips off a delivery which went across the left-hander and took the shoulder of the bat.

Starc (39 not out) and Neser (35) had earlier shared a rapid half century stand for the eighth wicket after England seemed to have contained the damage and had Australia on 390-7 at tea.

Jhye Richardson lofted Chris Woakes (1-103) for a big six off his second ball over midwicket before Smith declared when Richardson was caught behind off Woakes.

Ben Stokes, who dropped a hard catch of Starc off his own bowling, finished with 3-113 but Australia removed both England openers cheaply before play was called off early.

Smith and Alex Carey (51) combined in a 91-run sixth wicket stand before Anderson removed both batsmen in successive overs just before tea. Smith shuffled back across the line and was adjudged lbw and Carey chipped an easy catch in the covers.

Earlier, England took three wickets during an even first session after Australia resumed on 221-2.

In a dramatic 40 minutes to start the day, Labuschagne, resuming on 95, edged Jimmy Anderson to third man for four to record the sixth century of his career and first in the Ashes.

Moments later he was caught behind off Ollie Robinson, retreating all the way to the boundary rope before replays showed it had been a no-ball.

Labuschagne eventually fell in the 400th minute of his innings, lbw after trying to leave a ball in Robinson's next over that came back at him.

Bradman achieved his 2,000 runs in 22 innings, Jamaican Headley in 32 and England's Sutcliffe and Australia's Hussey in 33.

Labuschagne has now scored centuries in three consecutive day-night tests at the Adelaide Oval, averaging almost 100 and with just one score below 40.

Australia's humungous first innings total could prove significant in the outcome of the game. All eight teams which have posted 300 or more batting first in day-night tests have gone on to win. And the eight teams to pull up short of that mark have all lost.

Australia is playing its ninth day-night match, and has won the previous eight, all at home.

First test century-maker Travis Head was out for 18 Friday after being bowled playing over the top of a ball from captain Joe Root. Cameron Green soon followed for 2, bowled by Stokes when the England allrounder pitched up and the delivery seamed away into his off stump.

On Thursday, Smith returned to the Australian captaincy for the first time since the 2018 sandpaper scandal in South Africa after Pat Cummins was ruled out. Cummins was deemed to be a close contact of a positive COVID-19 case when he dined at an Adelaide restaurant on the eve of the match.

Smith became the third Australia captain in three tests. Tim Paine, who replaced Smith as test captain after the sandpaper scandal in South Africa, quit last month after reports emerged he'd been investigated four years ago for sending an inappropriate text to a work colleague.