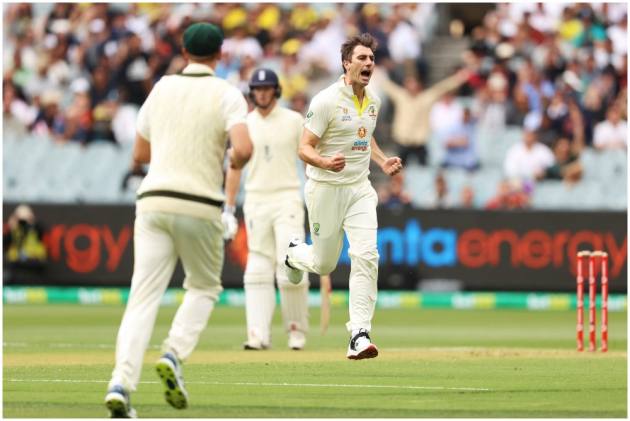 Australia skipper Pat Cummins recorded his 100th Test wicket at home when he dismissed England opener, Haseeb Hameed, for nought on Day 1 of the third Ashes 2021-22 Test at the Melbourne Cricket Ground on Sunday.

Cummins, who missed the second Test match in Adelaide, made an instant impact in the second over of the game. The Australian quick bowled a perfect length delivery outside off as Hameed moved forward to defend it. But the England opener got a nick for Alex Carey to complete the catch behind the wickets.

Cummins’ teammates in the Mitchell Starc and Nathan Lyon are ahead of him with 209 and 171 Test wickets respectively on home soil. Josh Hazlewood, who is also in Australia's Ashes 2021-22 squad has 130 victims to his name at home.

It's taken Pat Cummins less than one over to have an impact on his return to the side! #OhWhatAFeeling @Toyota_Aus | #Ashes pic.twitter.com/iAVB3vC33C

Cummins also dismissed Zak Crawley and Dawid Malan in the first session putting England on the back foot as they were down to 61/3. England lost three more wickets in the second session including skipper Joe Root for 50.

Hammed has failed to repay the faith England have shown in him in this ongoing series. The right-handed opener had scores of 25 and 27 in the first Test in Brisbane while he could only manage a total of six in the Adelaide Test.

Hameed’s 10-ball zero on Sunday morning was also England’s 50th duck in 2021. The all-time record also stands with England when they registered 54 scores of zero, back in 1998. Australia lead the series 2-0 and a win here will help them retain The Ashes.