Australia handed England a nine-wicket thrashing in the first Test of the Ashes 2021-22 series. After the match, England captain Joe Root analysed the team's shortcomings. 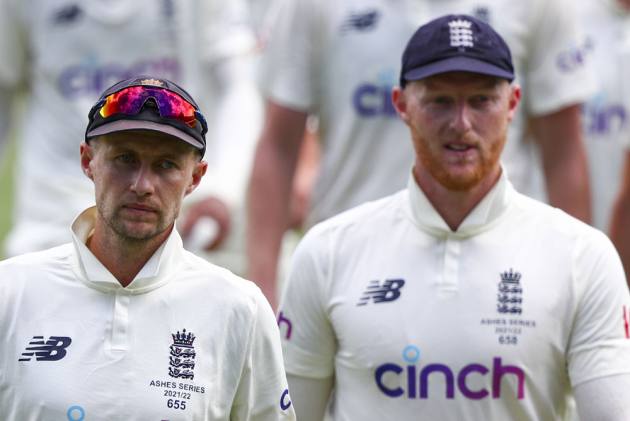 England's Ashes woes in Australia continued on Saturday with a nine-wicket defeat at The Gabba, Brisbane. Australia chased down the nominal target of 20 runs in 5.1 overs to take a 1-0 lead in the five-match series, and the visiting team's performance left skipper Joe Root frustrated.

England resumed Day 4 on their overnight score of 220/2 and 58 runs in deficit with Root and Dawid Malan in an unbeaten 159-run stand. But their innings folded for 425 all out just before lunch.

"Frustration, I think. We worked really hard to get back in the game last night and we knew that if we got through the new ball unscathed and carried that partnership forward, we would really give ourselves a good opportunity to go on and post some sort of total which would've kept us in the game," Root told the official broadcasters after the match.

The defeat was England's 10th in 11 matches in Australia. There was a drawn MCG Test in 2017, but England's last Test win in Australia was more than a decade ago -- an innings and 83 runs victory at Sydney Cricket Ground in January 2011.

It was always going to be a monumental task to save the match after getting bowled out for 147 runs in the first innings, which also featured a first ball wicket from Mitchell Starc. Rain on Day 1 somewhat delayed the Aussie progression but the second day accentuated the hosts' domination in the match.

"40/4 is not a position to start a Test series, we know where we need to get better but I do think the way we responded in the second innings showed a great amount of character and fight," Root added, emphasising on his stand with Malan for the third wicket on Day 3.

The third day's play also witnessed Travis Head reaching 150 in less than ball a-run-a-ball knock (152 off 148), a performance which won the middle-order batter the player of the match award.

Head's innings came after a 156-run stand between usual suspects, David Warner and Marnus Labuschagne. And much of the blame for England's inability to take wickets was directed to Jack Leach, who conceded 102 runs for one wicket in 13 overs. His economy almost touching eight an over.

But the skipper defended the spinner by taking the blame upon himself.

"If anything... it falls on me for giving him [Leach] too aggressive fields too early, not allowing him to settle and give him a bit more of a chance early on," the skipper added. "Jack is a fine spinner in the 20-odd Tests he has played, he has shown what an instrumental part he can play within this team and I'm sure he will play a big part in the series moving forward."

Root, 30, came close to scoring his first Test century in Australia. But got dismissed for 89, falling to Cameron Green. And he remains optimistic, reminding his team-mates that "there is a huge amount of cricket to play."

The second match, a day-nighter, in Adelaide starts December 16. England are expected to have a full-frontal attack with both James Anderson and Stuart Broad in the line-up. The absence of England's two most successful bowlers somehow dented their chances in Brisbane.