Defending champions India finished on top of the Asian Champions Trophy table with 10 points ahead of South Korea, Japan and Pakistan. South Korea play Pakistan in another semifinal on Tuesday. 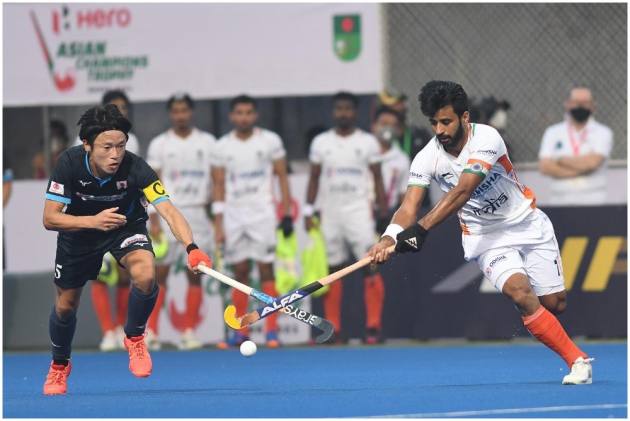 Back to their best after a slow start, defending champions and Olympic bronze-medallist India would start as overwhelming favourites against Asian Games gold winner Japan in the semifinal of the Asian Champions Trophy men’s hockey tournament in Dhaka on Tuesday. (More Hockey News)

The Manpreet Singh-led side's confidence must be sky high as they had thrashed Japan 6-0 in their last round-robin match and come Tuesday, India would definitely fancy another big win en route to the title clash.

Having said that, India will need to guard against complacency as any slip-up could spoil all their hardwork. India ended the round-robin stage of the five-nation tournament at the top of the standings with 10 points, ahead of Korea (6), Japan (5), Pakistan (5) and hosts Bangladesh (0).

But the start was far from ideal for India. Playing their first tournament after their historic Tokyo Olympics campaign, the Indians were held 2-2 by South Korea in their lung-opener before turning things around with a resounding 9-0 win over Bangladesh, followed by 3-1 victory over arch-rivals Pakistan and the thrashing of Japan.

Vice-captain Harmanpreet Singh has been a revelation not just at the back but from penalty corners as well, converting two against Japan on Sunday. And, he definitely will pose a big threat for the Japanese. The Indian midfield is also being held together brilliantly by skipper Manpreet and Hardik Singh.

The forwardline of Dilpreet Singh, Jarmanpreet Singh, Akashjdeep Singh and Shamsher Singh too has shone brightly in the tournament so far, scoring some fine field goals. The Indians completely outperformed Japan in all departments of the game in their league match and they would eye an encore in the semifinal as well.

The Japanese will have to lift their game by leaps and bounds and play out of their skin to give themselves any chance of registering an upset win. Young Suraj Karkera has been brilliant under the bar for India, making some brilliant saves throughout the tournament while the Harmanpreet-led Indian backline too defended stoutly, saving as many as five penalty corners against Japan on Sunday.

However, the Indian defence will need to be a little more cautious on Tuesday and concentrate on not conceding too many penalty corners, which could hurt them as past results hardly matters in knock-out stage matches.

A slight slip-up or lapse in concentration can derail their campaign and spoil their second successive ACT title. India had won the title jointly with Pakistan in the last edition in Muscat. Meanwhile, South Korea face Pakistan in the first semifinal on Tuesday.