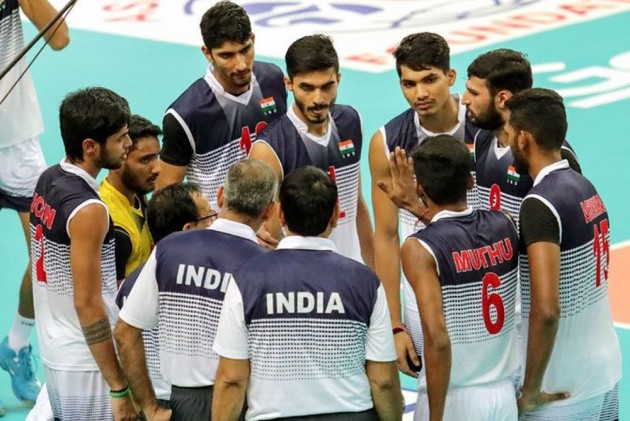 India on Sunday settled for the silver medal after suffering a 1-3 loss against Chinese Taipei in the final of the men's Asian U-23 Volleyball Championship. (SPORTS NEWS)

India put up a brave fight after losing the first two sets to secure the third set. However, blocking and reception errors in a hard-fought fourth set allowed Chinese Taipei to seal a comfortable 25-21, 25-20, 19-25, 25-23 win in the end.

India was slow to get off the blocks and allowed the opposition to steer the first set in their direction, especially after the 10 point mark.

The team did threaten to mount a comeback in the later part but the deficit proved too big to overturn eventually and Gulia's boys ended up conceding the set 25-21.

In the second set, powered by the combination of Muthusamy and Shon John, India took a lead early on and held on to the slim lead for most part. However, owing to some ordinary reception in ensuing minutes, they conceded the lead close to the 20 point mark after which Chinese Taipei never looked back. This resulted in an almost similar scoreline for the second set.

The third set saw some improved blocking by the Indian blockers Shikhar Singh and Prince but service errors at crucial points allowed a Chinese Taipei recovery midway through the set.

With survival at stake, the Indian spikers upped their game in the closing moments of the set and made the most of errors by the opposition to take the set 21-19.

In the decisive fourth set, Chinese Taipei maintained pressure from the first minute as Chang YS and Sung PT's spikes got the better of Indian blockers early on in the set.

But Shon John's quality spikes and some impressive blocking kept bringing India back into the match. Despite trailing by 7 points at one stage, they brought the difference to a single point to make the scoreline read 24-23.

But Chinese Taipei didn't take long to wrap up matters and a powerful spike once again proved too good for the Indians, giving Chinese Taipei the set as well as the game.

"It wasn't our best day in the office. But I am still extremely proud of the result," Indian coach Pritam Singh Chauhan said.

"Yes, we would have loved to return home with a gold but a silver is special for me as well as the young boys who worked extremely hard to reach this position. It's been an extremely special journey."

The team will return to the country on August 13.