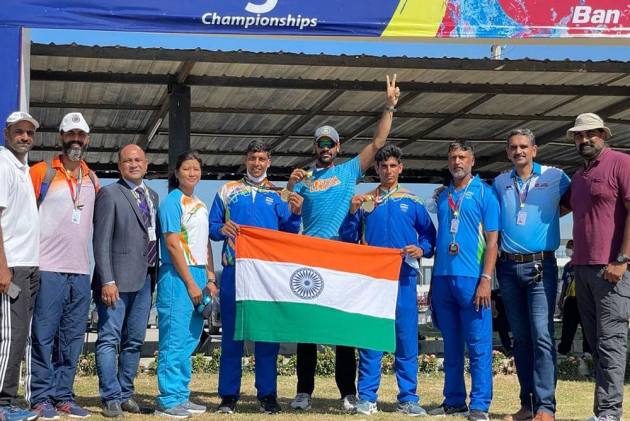 Senior rower Arvind Singh bagged a gold in the lightweight men's single sculls event while his compatriots won three silver medals as India signed off from the Asian Rowing Championship on a high note at Ban Chang, Thailand on Sunday. (More Sports News)

Arvind leapfrogged his opponents with a timing of 7:55.942s.

Arvind, who finished 11th at the Tokyo Olympics along with Arjun Lal Jat in the men's lightweight double sculls, beat his rivals from Uzbekistan, China, Vietnam, Indonesia and Thailand.

In lightweight men's double sculls, Ashish Phugat and Sukhjinder Singh won a silver with a timing of 7:12.568s, while in the men's quadruple sculls, Bittu Singh, Jakar Khan, Manjeet Kumar and Sukhmeet Singh finished second in a photo-finish clocking, 6:33:661s, losing the gold by 0.523 seconds.

Jasveer Singh, Punit Kumar, Gurmeet Singh and Charanjeet Singh clinched the other silver with a timing of 6:51.661s in men's coxless fours final.

"Overall, another good performance by India. Congratulations and best wishes to all the rowers, coaches, support staff and backend administrators, who managed the team all these months," secretary general of Rowing Federation of India MV Sriram said in a statement.

"A special mention to Ismail Baig, who consistently, year on year, turns out sterling results for India.