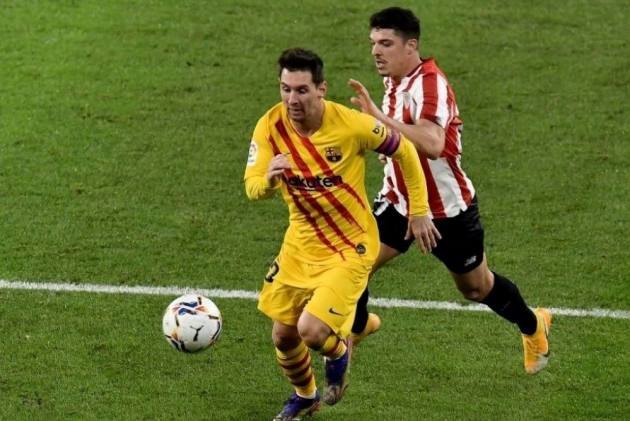 Inaki Williams made an instant impression on Athletic's new boss - appointed following the dismissal of Gaizka Garitano - by scoring inside three minutes for the home team on Wednesday.

Capitalising on a ridiculously high defensive line, the forward ran clear from inside his own half and, after cutting back inside a half-hearted challenge from Clement Lenglet, fired low past Marc-Andre ter Stegen to break the deadlock.

However, with Messi leading the way, Barca recovered from the setback to turn the game around by the interval, albeit with some help from the hosts.

Unai Simon was tempted out to deal with Messi's seemingly over-hit cross for the equaliser, the alert Frenkie de Jong stretching out to volley the ball back into the middle for Pedri to nod into an unguarded net.

The Athletic goalkeeper was caught again when his side conceded seven minutes before the break, Pedri the provider as his clever back-heeled assist set up the supporting Messi to pass the ball in, Simon - who had initially rushed out expecting the teenager to shoot - stranded out of position.

Athletic briefly threatened a recovery of their own early in the second half, yet it was always their opponents who carried the far greater threat in attack.

Having seen a goal ruled out for offside and a long-range shot denied by a post, Messi finally scored again when sweeping Antoine Griezmann's square pass home via the underside of the crossbar.

There was late drama when a turnover in possession allowed Alex Berenguer to tee up Iker Muniain for a first-time finish that cut the gap in the 90th minute, but Barca held firm to claim all three points.

What does it mean? Barca still fighting

Ronald Koeman called for realism after the 1-1 home draw with Eibar at the end of December, insisting it would be "very difficult" for Barcelona to challenge the two Madrid clubs for LaLiga glory.

However, they have won two on the spin since that Camp Nou setback, moving them to third in the table. The combinations produced by the quartet of Messi, Pedri, Griezmann and Ousmane Dembele offer hope they can still yet claw back their title rivals, though defensive concerns remain after conceding two soft goals in the Basque country.

Messi's commitment beyond the next few months remains unclear, but Pedri looks to be the long-term future for Barca. The midfielder scored one goal, set up another and created three chances in total, as well as completing over 90 per cent of his 61 attempted passes.

Not so simple for Simon in goal

Marcelino asked for Athletic's players to be brave ahead of the game but he may have wished his goalkeeper had taken a more cautious approach in the first half. Simon should have stayed at home for the opener and his positioning for the second allowed Messi a straightforward finish.

- Barcelona have three away LaLiga wins in a row for the first time under Ronald Koeman.
- Messi has been directly involved in 25 goals in 26 LaLiga games against Athletic (17 goals and eight assists).
- The Argentina forward has played more LaLiga games without losing against Athletic than he has against any other opponent in the competition (GP26 W19 D7 L0).
- In-form Messi has been involved in 10 goals in his last 10 games in all competitions (eight goals, two assists).
- Messi has attempted 47 shots on target this season in LaLiga, more than double that of the next player in this ranking (Gerard Moreno, 21).

Barcelona are on the road again on Saturday, as they travel to Granada. They will hope Athletic can do them a favour, meanwhile, when they visit LaLiga leaders Atletico Madrid.