Atletico Madrid squandered their lead with two minutes to play in Sunday's Derbi, with Real Madrid frustrating their neighbours again 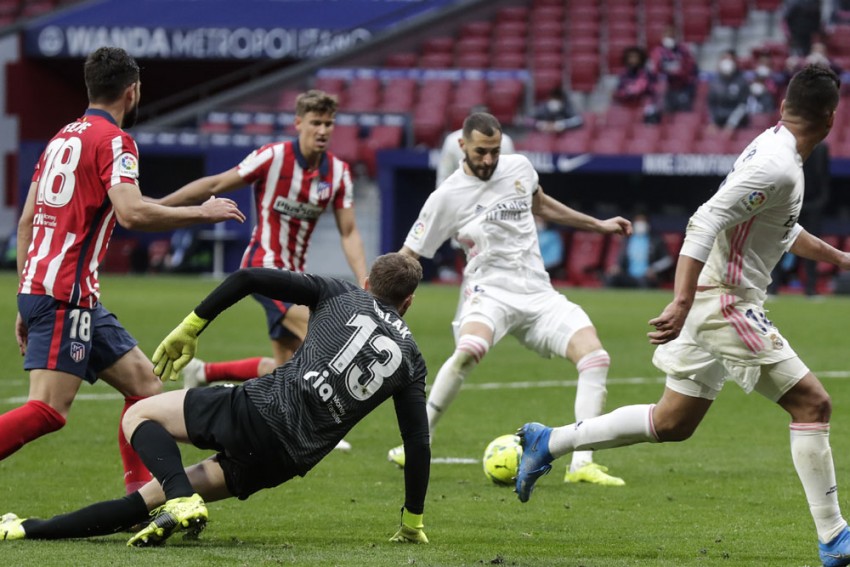 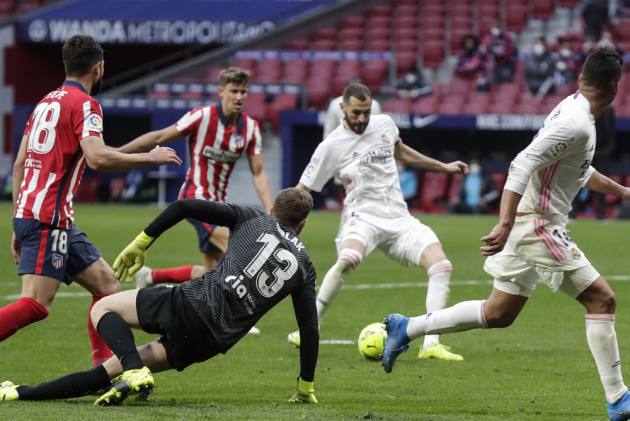 Atleti are the side in the ascendancy in Spain's top flight this season, but they have been second best in their own city in recent years and could not end a poor sequence in this fixture on Sunday.

Luis Suarez's 10th league strike against Madrid had appeared enough for a precious victory, yet missed chances came back to bite Diego Simeone's men as the long-serving Atleti coach was denied a club-record 309th win in the job.

Benzema, fit again to captain the side, marked his 371st LaLiga appearance – a record among Madrid's non-Spanish players – with an 88th-minute leveller to maintain the champions' interest in the title race.

Madrid stay third, five points behind Atleti, but Barcelona – winners against Osasuna on Saturday – are now within three of the leaders, who have one win in five in all competitions.

The Madrid Derby ends in a draw.

While Madrid have a hold over their neighbours, no player has scored more league goals against Los Blancos than Suarez since he moved to Spain in 2014 and the Uruguayan made the most of the game's first chance of note after 15 minutes.

Marcos Llorente beat Nacho on halfway and advanced to slide through a pass that met the well-timed run of Suarez, who shaped a fine low finish around Thibaut Courtois.

The first half was otherwise short of goalmouth action, although Madrid's appeals for handball by Felipe prompted a VAR review shortly before the break, only for referee Alejandro Hernandez Hernandez to stick with his original decision rather than awarding a penalty.

Courtois twice came to Lucas Vazquez's rescue at the start of the second period as he was exposed up against Yannick Carrasco, brilliantly blocking from both the rampaging winger and Suarez.

It appeared as though the brilliance of Atleti's own goalkeeper would ensure those stops would not scar the hosts as Jan Oblak stood tall to save from Benzema twice in quick succession and then parried clear the same man's free-kick.

But there was still time for Benzema to have the final say, granted an empty net when Casemiro squared in front of Oblak after Suarez had lost the ball up the field.

What does it mean? Simeone's side stalling as big two close gap

Since the start of February, Atletico have taken just nine points from six matches. In the same spell, Barcelona and Madrid have played the same number of fixtures and claimed 16 and 14 points respectively.

Comfortable a month ago, Simeone's side are now very much in a title race.

This looked like being a deserved victory that would set them back on course, but they ceded control in the closing stages and were eventually outshot 18-11, with Oblak required to make seven saves.

When Atleti led with two minutes to play, Suarez and Oblak were set to be the heroes, with the former Barca star having six attempts and creating one more as his team-mate at the other end seemingly ensured his solitary strike would be enough.

Instead, Benzema and Courtois were the men celebrating come full-time. Courtois made only four saves, but they came at crucial times, while Benzema finally got the better of Oblak with the last of his eight efforts.

Injuries have hampered Madrid's season and the absence of Dani Carvajal, an experienced, natural right-back, looked as though it would prove costly on Sunday.

Atleti directed 41.5 per cent of their attacks down the left flank, where Vazquez was situated, and they were well on top at the start of the second half despite Madrid dominating possession.

The decision to replace Carrasco, who had created two chances as well as drawing a save from Courtois, was a peculiar one and it did not pay off.

Atleti play their game in hand in LaLiga at home to Athletic Bilbao on Wednesday, while Madrid are not in action again until Saturday when they host Elche.