Atletico hold a narrow lead over Barcelona, Real Madrid and Sevilla in a thrilling title race that Diego Simeone sees as beneficial for LaLiga. 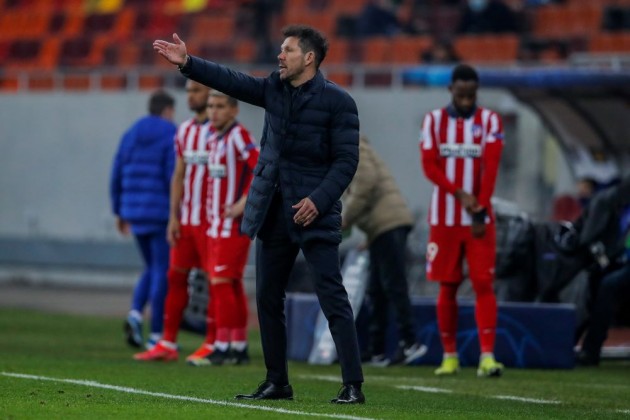 Barca missed the chance to go top of LaLiga on Thursday as they slipped to a stunning 2-1 home defeat against Granada, with coach Ronald Koeman sent off prior to Jorge Molina's 79th-minute winner.

It means Atletico lead Real Madrid and Barca by two points, with Sevilla just a point further back with five games to play.

Atletico visit Elche on Saturday prior to Madrid's clash with Osasuna. Barca face Valencia at Mestalla on Sunday and Sevilla host Athletic Bilbao on Monday.

1 - Last night vs Granada, Barcelona suffered a LaLiga defeat at the Camp Nou despite leading at half-time for the first time since May 2008, when under Frank Rijkaard, they lost 2-3 to Mallorca - a season in which @realmadriden won the league and Barca finished third. Troubling. pic.twitter.com/cTzH3KUvAD

But Simeone is solely concentrated on what his side do, rather than the fortunes of others in a title race that is a welcome tonic to the Barca-Madrid duopoly that has long since dominated LaLiga.

"It is novel and does good to Spanish football," Simeone told a pre-match media conference of the four-team battle.

"The possibility that several teams can win is good. We are in a four-way fight in which match by match takes on a more important value.

"With four teams so tight I can only think about the next game. Trust the players who have been having a very good season."

Asked about Barca's defeat, Koeman replied: "I saw the end of the match. A competitive match. But I was only thinking about the only thing that matters to us, which is Elche. A team that has changed and competes very well since [head coach Fran] Escriba's arrival.

"The pressure is always there. If you play second and the rivals have won, you have pressure, but if you play before you also have it. You have to focus on what depends on you and nothing else."