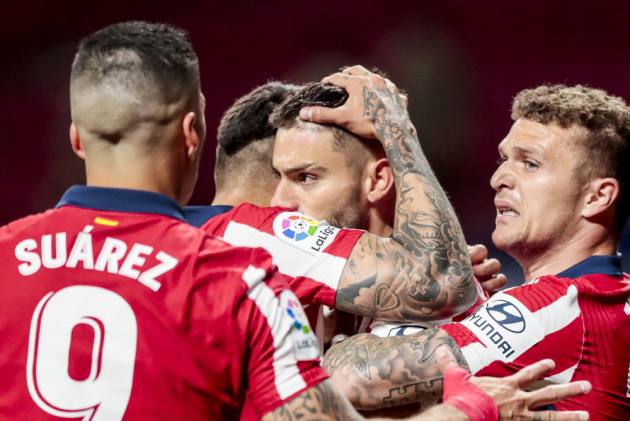 Atletico Madrid could be within one win of clinching their second LaLiga title of Diego Simeone's tenure after they beat Real Sociedad 2-1 in a gripping tussle on Wednesday. (More Football News)

With Barcelona dropping points this week, but fourth-placed Sevilla winning, Atleti responded with a performance worthy of champions at Wanda Metropolitano, though it came with a nervy finish.

Yannick Carrasco and Angel Correa got the goals to put them in control, striking in the space of 12 first-half minutes.

But Atleti failed to take the chances to make the scoreline more comfortable and, after Jan Oblak and the upright came to their rescue, La Real set up a grandstand finish through Igor Zubeldia.

Atleti ultimately hung on, however, meaning they will settle a dramatic title race in their favour by defeating Osasuna next time out, should Real Madrid fail to beat Granada on Thursday.

Luis Suarez curled just wide and Marcos Llorente was denied by Alex Remiro as Atleti started as they meant to go on, with the pressure telling in the 16th minute.

Llorente was the provider with a weighted cross to the back post where Carrasco, having beat La Real's offside trap, controlled it and prodded a finish through Remiro's legs.

It was 2-0 12 minutes later when Suarez played in Correa, who coolly found the bottom-left corner.

With little to lose, La Real hit back, forcing Oblak into two brilliant saves, the second a fingertip onto the post to deny Alexander Isak.

Wasteful finishing plagued Atleti's second-half display, with Carrasco and Suarez fortunate not to be made to pay for poor misses when Portu crashed an effort against the post, with Stefan Savic making a heroic block.

Atleti were denied a fifth clean sheet in the space of six games when Zubeldia bundled in from a corner with seven minutes remaining, yet Simeone's men had the grit to hold on and put the title within reach.

What does it mean? All eyes on Los Blancos

Simeone charged down the tunnel, fists in the air, at full time, and he knows just how big this victory could be. Atleti now sit on 80 points, four ahead of Barca and five ahead of third-placed Madrid, who have Thursday's game in hand, but must win it to keep the pressure on their city rivals.

Wednesday's win, which makes it eight LaLiga matches unbeaten for them against La Rea, for Atleti also almost certainly counts Sevilla (74 points) out of the title race, with the goal difference surely too much of a gap to overturn even if Julen Lopetegui's team – who have both beaten and lost to Atleti this season – win both their games and the leaders lose twice.

Llorente the creator once again

Llorente has now been involved in six of Atleti's last eight goals in LaLiga (three goals and three assists).

His assist for Carrasco's opener – a delightful cross – was one of three opportunities he created, a team high.

Sociedad did eventually scramble in a goal, though it came only after a stunning individual performance from Oblak.

His two saves from Isak in the first half – he made six in total throughout – were exceptional, while he also made a similarly brilliant stop to keep out a Portu effort after the break. As far as goalkeepers go, he is surely the world’s best right now.

- This is the third time in history that Atleti have reached 80 or more points after 36 games played in LaLiga (assuming three points per victory) after 2013-14 (88) and 2015-16 (85).
- Atleti are unbeaten in their last 19 matches played on a Wednesday in LaLiga (W15 D4), since a defeat to Real Madrid in April 2012 (1-4).
- Koke made his 500th appearance for Atleti in all competitions, becoming the second player to reach this figure in the history of the club after Adelardo Rodriguez (550).
- Carrasco has been involved in 14 goals this season in LaLiga (six goals, eight assists), equalling his record in a same campaign in the competition (14 in 2016-17 – 10 goals, 4 assists).
- Suarez has been involved in 11 goals in 12 games against La Real in LaLiga (five goals and six assists). Only against Deportivo de La Coruna (eight) and Deportivo Alaves (seven) has he provided more assists in the competition.
- No other player has provided more assists than Llorente in LaLiga this season (11, level with Iago Aspas).

Another home match, against Osasuna, comes next for Atleti this weekend, before they round off the season against strugglers Real Valladolid on May 23. Bizarrely, La Real face exactly the same opponents, just in the reverse order.