US Open 2021 champion Daniil Medvedev moved level with Alexander Zverev on a tour-leading 56 wins after a tense tiebreaker in the decisive set. 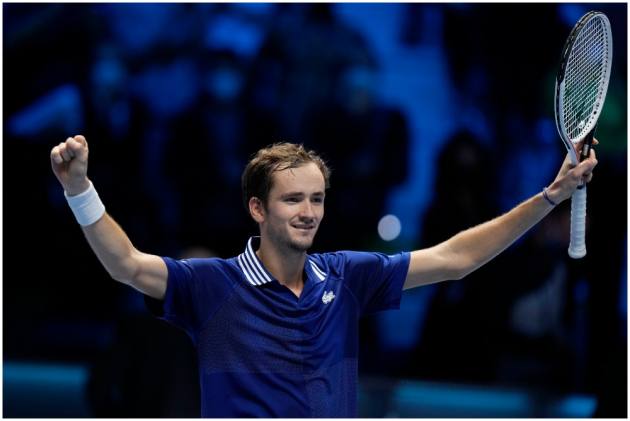 Defending champion Daniil Medvedev clinched his place in the ATP Finals semifinals after beating the 2018 champion Alexander Zverev, making it two wins out of two in Turin. (More Tennis News)

Late entrant Jannik Sinner could join him after storming past Hubert Hurkacz in straight sets in the evening match, just hours after replacing Italian compatriot Matteo Berrettini in the tournament.

Daniil Medvedev, who won the US Open in September for his first Grand Slam title, took just over 2.5 hours to beat Alexander Zverev 6-3, 6-7 (3), 7-6 (6) and move level with the German on a tour-leading 56 wins after a tense tiebreaker in the decisive set.

“Definitely one of the matches to remember,” Medvedev said.

Daniil Medvedev leads Red Group and was assured of his place in the final four after Matteo Berrettini pulled out of the tournament. Berrettini retired against Alexander Zverev on Sunday with an abdominal injury and although he trained on Tuesday, he could not recover in time and was replaced by Jannik Sinner — the first alternate.

Helped by fast conditions inside the Pala Alpitour, Medvedev served 14 aces and Zverev 18.

Daniil Medvedev was in a fight from the start, fending off three break points in his opening two service games but also breaking Alexander Zverev to take a 3-0 lead. The world No. 2 went on to win the opening set with a delightful backhand down the line.

Victory looked in good time in the second set as Medvedev dropped only two points in his first five service games. But Zverev held on and saved three break points to force the tiebreaker which the German won.

In the deciding set, Medvedev had to save a break point to prevent Zverev from serving for the match, and he won the tiebreaker on his third match point when Zverev netted a backhand.

Daniil Medvedev will face Jannik Sinner in the final group match and despite having played a match less than his rivals, the young Italian can still reach the final four.

The 20-year-old Sinner showed no signs of nerves as he won 6-2, 6-2, breaking his opponent's serve twice in each set and sealing the result when Hurkacz sent a forehand long — much to the delight of the passionate home crowd.

Instead of signing his name on a TV camera lens as most winners do, Sinner wrote: “Matteo sei un idolo” (Matteo you're an idol).

"I'm playing this tournament for Matteo,” an emotional Sinner said in his on-court interview after the match.

Jannik Sinner later revealed he only found out he was definitely replacing Berrettini four hours before the scheduled start of the match.

“Around 5 p.m. I found out I would be playing. Matteo sent me a message saying 'go warm-up, good luck and enjoy yourself.' He's an incredible person, apart from being a great player."