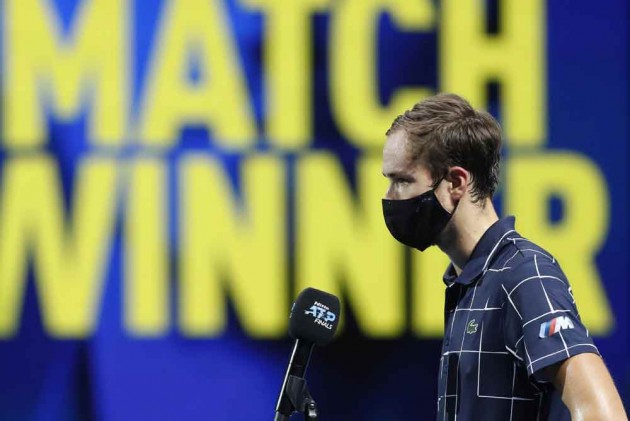 Daniil Medvedev maintained the last remaining 100 per cent record at the ATP Finals to head into his last-four meeting with Rafael Nadal on a high. (More Tennis News)

The world number four had not dropped a set against Alexander Zverev or Novak Djokovic and showed the already-eliminated Diego Schwartzman no mercy in a 6-3 6-3 success on Friday.

Medvedev wasted little time in taking command of proceedings, even if Schwartzman battled to an initial hold.

The Russian led at the next opportunity, picking out the right corner of the court with his forehand and then racing through his own service games to preserve his advantage.

A sharp increase in pressure then allowed Medvedev to clinch the opener on Schwartzman's serve, despite seeing an outrageous stretching return to tee up set point go to waste.

Medvedev converted next time, following up a blistering cross-court effort by blasting straight through his opponent at the net.

The breakthrough in the second again came in Schwartzman's second service game, with the third of three break points a sweetly struck backhand.

That was enough to seal victory, Medvedev breezing through this dead rubber - served out to love - before the real business continues against Nadal in Saturday's semi-final.