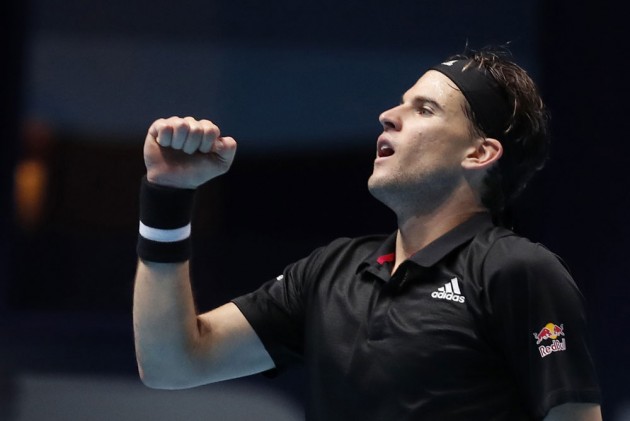 An all-time classic at the ATP Finals saw Dominic Thiem beat Rafael Nadal in straight sets to close in on a place in the semi-finals. (More Tennis News)

The Austrian needed three tie-breaks to take a four-set victory over Nadal at the Australian Open in January and Tuesday's clash in London was similarly played on a knife-edge.

In the end, Thiem made it three wins in his previous four meetings with the French Open champion, prevailing 7-6 (9-7) 7-6 (7-4) after nearly two and a half hours of the highest quality tennis at the O2 Arena.

Nadal enjoyed a one-sided victory over Andrey Rublev in his first match in the group, but this was more in keeping with the three-set battle Thiem had with Stefanos Tsitsipas.

The level of serving – only 15 points were dropped behind a first serve during the opening 12 games – and the supremacy of the groundstrokes meant there were no break points prior to the first tie-break, Thiem clinching it with an inside-out forehand winner after roaring back from 2-5 down.

There was no let-up in the standard and intensity of play early in the second either, as summed up by consecutive points in which first Nadal and then Thiem produced astonishing running forehand winners.

Thiem at last got the first break of the match to go 4-3 ahead but the US Open champion promptly surrendered that lead as Nadal refused to give in.

In the second tie-break, a spectacular backhand down the line helped Thiem edge ahead 4-3 and, although Nadal saved two further match points, his sixth defeat of the year was sealed when he pushed a backhand into the tramlines.

"I think it was a great match from the first to the last point," Thiem, who hit 37 winners to 22 unforced errors, said to Amazon Prime Sport. "I was pretty lucky to get the first set, 2-5 down in the tie-break, and against Rafa, obviously it's nice to win the first set but still I had to stay super focused.

"I had the feeling the whole match was very high-level but I'm very happy with the way I served. Most of the time I get the first serve in, I'm into the offence. When I was in difficult situations, the serve helped me out a lot."

Thiem will be the first player to qualify for the semi-finals if Tsitsipas defeats Rublev in the late session.