England's Stuart Broad and James Anderson survived six balls each to save the fourth Test against Australia. It was the sixth time for England and the 24th time overall when the last pair saved a Test match. 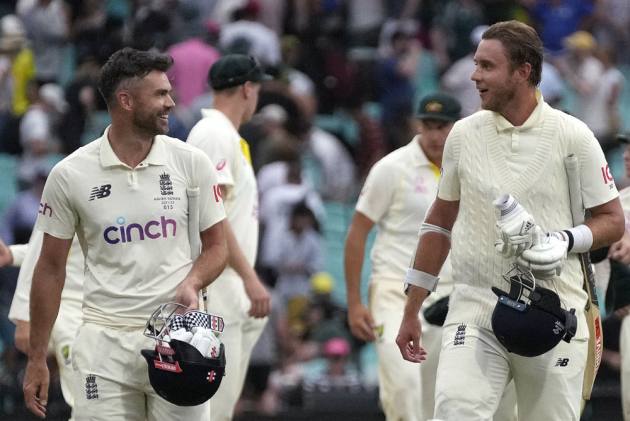 England ended Australia's hopes of Ashes whitewash by earning a draw on the fifth day of the fourth Test match at Sydney Cricket Ground on Sunday (January 9).

Jack Leach, Stuart Broad and James Anderson survived 64 balls under floodlights to secure a thrilling draw. Jack Leach and Broad faced 52 of them, most of which were against Pat Cummins, Scott Boland and Mitchell Starc before bad light forced Australia to turn to Steve Smith and he almost became a hero with the ball.

The former skipper prized out Jack Leach, his first Test scalp since 2016 against South Africa at Perth, caught at slip after England's spinner had battled manfully for 34 balls without error. It left Stuart Broad and James Anderson to survive six balls each from Nathan Lyon and Smith respectively, and England's veterans held on.

** It was only the second time in Ashes history a team had saved a game nine-down in the fourth innings, the first being the famous 2005 draw at Manchester when the Australian last pair of Brett Lee and Glenn McGrath faced 24 balls.

** It was the sixth time for England and the 24th time overall when the last pair saved a Test match. It happened only the third time against Australia.

** England avoided defeat for the first time in the series and for just the second time in their previous 14 Tests in Australia. It was only England's second non-defeat in Australia since 2013, alongside a draw at Melbourne in 2017-18, and it ended Aussies' hunt for their third whitewash since 2006-07.

** Zak Crawley scored a fluent 77 in 154 minutes from 100 deliveries with 13 fours at the top of the order. It was the first fifty by an England opener in a chastening series. Overall, it was Zak Crawley’s fifth fifty in 30 innings of 17 Tests. He also made a century.