Set a 468-run target by Australia, England were bowled out for 192 on the final day of play in the day-night Test at Adelaide Oval. Jhye Richardson took five wickets as Australia followed their nine-wicket win in the first Test. 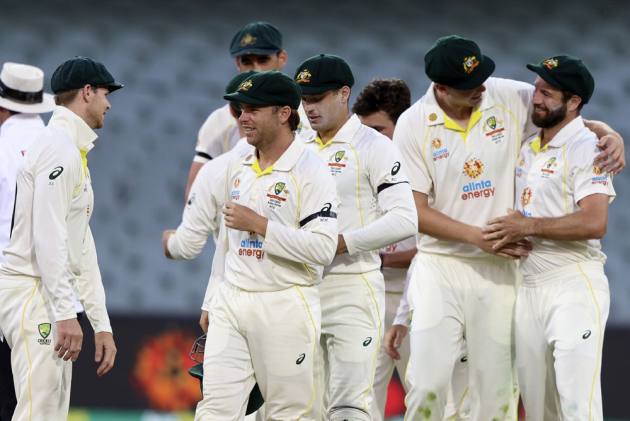 Australia took a 2-0 lead in the five-test Ashes series on Monday by beating England by 275 runs and all but ensured the century-old urn will remain Down Under.

Set 468 runs to win, England was bowled out for 192 with 21 overs remaining on the final day of play in the day-night test at Adelaide Oval.

Jos Buttler (26) faced 207 deliveries for England before treading on his stumps to be out hit wicket in a losing cause.

“That's the attitude we have to harness through the whole game,” England captain Joe Root said.

“The fight and attitude was great today and we just have to do more of it.”

“We always felt (it would only take) a couple of balls, there was still plenty of time left. We just tried to stay calm,” Smith said.

Only one team has come from 2-0 down to win an Ashes series: Don Bradman's Australians in 1936-37. As holders of the Ashes, Australia needs only to draw the next match.

Paceman Jhye Richardson took five wickets as Australia followed its nine-wicket triumph in the first test in Brisbane with another resounding win, its ninth consecutive win in day-night matches.

Josh Hazlewood missed the Adelaide test because of a side strain. Fast bowler and captain Pat Cummins, a late scratch from the second test because he was a close contact of a COVID-19 case, will rejoin the squad on Thursday.

Hazlewood will need to prove his fitness in the Melbourne Cricket Ground nets to play the Boxing Day test starting Dec. 26. The fourth and fifth tests in Sydney and Hobart, respectively, are in January.

Under-pressure opener Marcus Harris, who averages 22.19 from 12 tests after scores of three and 23 in Adelaide, is expected to remain at the top of the order.