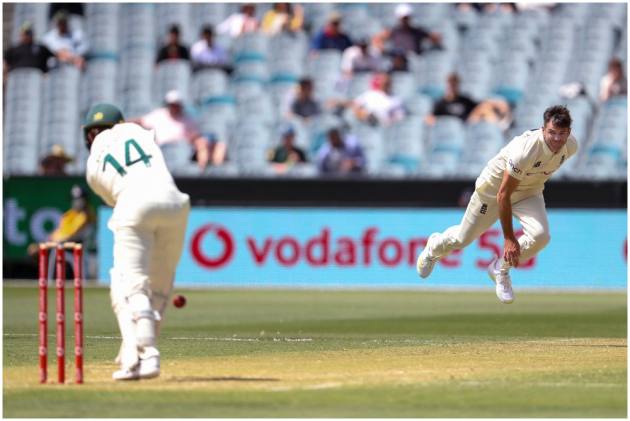 Age is just a number for James Anderson. At 39, the veteran of 600-plus wickets in Tests is doing all the things that a newbie would do, drawing attention from several greats in the commentary box on the second day of the ongoing third Ashes Test at the MCG on Monday.

After packing Australia opener David Warner on Sunday evening, Anderson put the visitors in the driver’s seat early on Monday with his discipline, control and few wickets. Not just wickets, Anderson's jaw-dropping athleticism on the field left everyone in awe.

First, he dismissed Steve Smith with a perfect in-swinger that went past the Australian’s pads and hit the stumps. Anderson’s second victim of the day was Marcus Harris, drawing the left-hander forward and finding an edge to Joe Root at first slip.

Anderson flies ... but drops what might have been a classic #Ashes pic.twitter.com/mDuErCZYug

Moments later, Anderson nearly took a screamer. Pulling a Mark Wood delivery that was pitched outside off, Cummins hammered towards mid-on to which Anderson went flying parallel to the ground, managed to stick his palm out but couldn’t hold it. Had Anderson taken the catch, could have been a best in 2021.

However, Anderson had the last laugh when he had Cummins for 21, caught by Haseeb Hameed. Anderson’s exploits on the field also left former England captain Michael Vaughan calling the modern-day pace great ‘sheer greatness’.

“In Jimmy Anderson, we’re watching sheer greatness. Will England ever produce a bowler like this ever again? I’m not too sure they will,” Vaughan tweeted. “He’s been that good over the years and we’ve just got to revel in what we’re seeing.

We are witnessing sheer greatness in Jimmy Anderson .. Enjoy it whilst it lasts as I am not sure English game will see another one like him .. #Ashes

While Anderson gave his all on the field to save the Test match, England batters once again faltered in the second innings putting the visitors on the brink of yet another loss in the series. Australia lead the five-match series 2-0.