Usman Khawaja became the third player to hit two centuries at the Sydney Cricket Ground. Former Australia captain Ricky Ponting was the last man to score two centuries in an SCG Test - in 2006 vs South Africa. 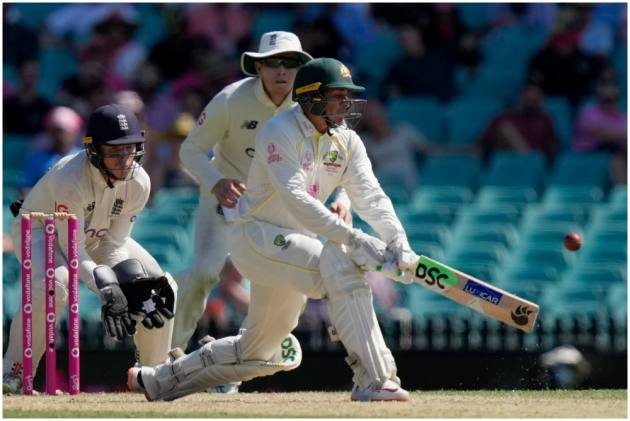 Openers Zak Crawley and Haseeb Hameed then survived a nervous 11 overs in fading light to get England safely to stumps at 30 without loss. (HIGHLIGHTS | SCORECARD)

Khawaja, who scored 137 in the first innings in his first appearance since the 2019 Ashes series in England, headlined another dominant day for Australia with an unbeaten 101 off 138 balls as part of a 179-run partnership with Cameron Green.

The 35-year-old scored his first fifty off 86 balls, but then accelerated his scoring rate by playing some extragavant strokes and brought up his hundred just 45 balls later with a two off Dawid Malan. “I don't think it has sunk in yet,” said Khawaja, who's 10th Test century included 10 boundaries and two sixes.

“I've always wanted to score a century in both innings of first-class cricket and never done it. But it's a nice one to tick off and put the team in a situation where hopefully we can win a test match tomorrow.”

It was just the third time that twin centuries have been made at the Sydney Cricket Ground with former Australia captain Ricky Ponting the last man to score two centuries in an SCG Test — 2006 vs South Africa.

Khawaja is playing this Test only because of Travis Head testing positive for COVID-19 ahead of the match, but has surely put in a undeniable claim to be retained for the fifth test in Hobart after back-to-back centuries.

“Happy for him, but obviously would have liked it against different opposition,” said England batting coach Graham Thorpe. “I thought he played very well and made it very hard for Australia to leave him out.”

“He looked a better player from when he last played for Australia and not a bad one coming in to the team.” Green (74) made a welcome contribution for Australia, which had sunk to 86-4 earlier in the day, with his second half-century in his eighth Test.

The record successful fourth innings chase at the SCG is 288 runs, which was achieved by Ponting's Australia in the same 2006 Test against South Africa.

While it's highly unlikely England will defy SCG history and chase down a near 400-run target, Crawley (22 not out) and Haseeb (eight not out) helped give England a glimmer of hope that it may yet save the game and achieve its best result so far in the series.

“With some of the injuries we've got we're going to need whether it is two, three or four players to really stand up and bat for a long time,” said Thorpe. “What I want to see is us play positively and have a good mental approach to it.”

“I thought tonight our appoach from Zak and Hass (Haseeb) was very good. I thought they moved well, you could see their intent.” Rain is also forecast for Sydney on Sunday which may assist England's cause in playing for a draw.

“(It will) be interesting to see how tomorrow plays,” said Khawaja. “Fingers crossed we get some good weather because we probably need all those 98 overs that we have. It's going to be a bit of a grind but if we can keep asking questions over and over again I think we're a chance.”

Earlier, spinner Jack Leach took four wickets for England, including taking Green and Alex Carey off the final two balls of Australia's innings, in what was his best bowling performance of the series.

Leach (4-84) also took Marcus Harris (27) and then got the prize wicket of Steve Smith for 23, bowling the star batsman with a delivery that kept low of the SCG pitch to reduce Australia to a potentially vulnerable 86-4.

Mark Wood, who has troubled all of Australia's batsmen with his pace this series, got the wickets of Warner (3) and Labuschagne (29), both caught behind by Ollie Pope, who had replaced injured wicketkeeper Jos Buttler.

Resuming Saturday at 258-7, England could only muster another 36 runs as Nathan Lyon, then Scott Boland quickly mopped up the lower order to establish a first-innings lead of 122 runs. Lyon (2-88) struck in the third over the morning, teasing Jack Leach into a big shot but was easily caught by Pat Cummins for 10.

Boland, returning with the all-clear after needing a scan on his ribs following a fall while he was bowling just before tea on Friday, finally ended Jonny Bairstow's defiant innings at 113. Bairstow faced 158 balls, hitting eight boundaries and three sixes.

Boland then had Stuart Broad caught behind for 15 to end the innings. Boland finished with 4-36 and now has 11 wickets in first three test innings. Over the first two rain-affected days at the SCG, Australia made 416-8 declared led by Khawaja's 137.