Delivering on his pre-match warning that he has "found his hands", Steve Smith hammered the Indian bowlers to raise his 10th ODI hundred 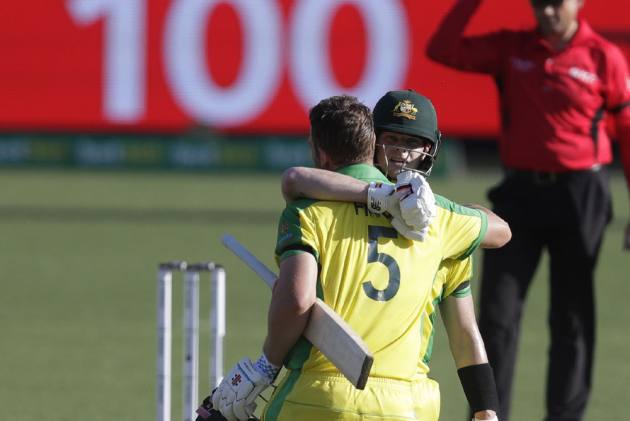 Skipper Aaron Finch and his predecessor Steve Smith struck confident yet contrasting hundreds on a flat track to lead hosts Australia to a commanding 374 for six against a listless India in the first One-day International, in Sydney on Friday.

On a sluggish pitch with occasional spongy bounce on offer, Finch shrugged off his poor IPL form to raise his 17th ODI century after electing to bat in the series-opener.

Delivering on his pre-match warning that he has "found his hands", Smith hammered the Indian bowlers to raise his 10th ODI hundred, which was third fastest for an Australian as it came off 62 balls.

Finch's 114-run innings, that came off 124 balls, had nine fours and two sixes while Smith took 66 balls for his 105-run knock, embellished with 11 fours and four sixes.

Ever-hungry David Warner (69) and 'Big Show' Glenn Maxwell (45 off 19 balls) also came to the party as Indian bowlers cut a sorry figure with little assistance from the pitch.

They grassed three catches along with numerous instances of sloppy fielding during the innings.

The same Indian fast bowlers, who looked lethal in the IPL, appeared jaded and without much sting on Friday as the Australian batsmen played them effortlessly.

Finch and Warner set the platform for the huge total with their 156-run opening stand. They handled the initial nagging overs by Mohammed Shami (3/59)and Jasprit Bumrah (1/73) cautiously before getting the measure of them.

Navdeep Saini (1/83 in 10 overs) struggled with his length for the better part.

They also handled the spin challenge with ease as both Yuzvendra Chahal (1/89) and Ravindra Jadeja (0/63) could hardly trouble the two openers.

Leg-spinner Chahal ended up leaking 89 runs from his 10-over quota with the home batsmen finding plenty of boundaries off him.

It was the worst-ever performance by an Indian spinner in the ODI format.

The breakthrough for Indians came as late as 28th over, when Shami had Warner caught behind on a referral.

Smith was saved by DRS after being given lbw off Jadeja and he never looked back.

Back in Australian jersey, Maxwell once again looked at ease while reverse sweeping Chahal for a six. Another shot worth remembering was deposition of Saini into the deep mid-wicket stands for a maximum.