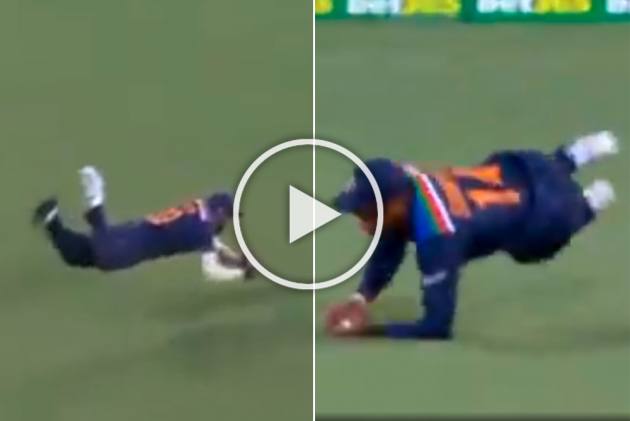 After the ODI debacle, India hit back to beat Australia by 11 runs in the first T20I at Manuka Oval, Canberra on Friday. And India's win was made possible by 'concussion substitute' Yuzvendra Chahal, who claimed the big wickets of Aaron Finch and Steve Smith.

The all-rounder hit 23-ball 44 to help India post a fighting total of 161/7. But his absence in the second half of the match became a massive talking point.

In the final over of the Indian innings, Jadeja copped a bouncer from Mitchell Starc, then limped back to the pavilion unbeaten. During the innings break, India took the concussion call to replace Jadeja with Yuzvendra Chahal.

Later, as it turned out, Chahal produced the goods for India, claiming three wickets, including those of Finch and Smith. And glorifying Chahal's substitution were the stunning catches taken by Hardik Pandya and Sanju Samson.

Watch both the dismissal here:

After the match, Samson revealed that Jadeja "felt dizzy" after the completion of the Indian innings.

"He got hit on the helmet in the last over (off Mitchell Starc) and when he came back to the dressing room, he was asked by the physio (Nitin Patel) how he felt. He (Jadeja) said that he was feeling a little dizzy," Samson told mediapersons during the post-match virtual media conference.

Virat Kohli said that India didn't have plans to play Yuzvendra Chahal, but admitted that the concussion substitute rule worked out well.

"There were no plans of having Yuzi (Chahal) in the game. Jaddu (Jadeja) got a knock on the side of the head and was a bit dizzy and still is," Kohli said in the post-match presentation.

Aussie skipper Finch preferred to play it down when asked about the concussion substitute.

"Their doctor had ruled Jadeja out with concussion and you can't be challenging a medical expert opinion in that regard," he said.

Meanwhile, Australia all-rounder Moises Henriques questioned whether Chahal can be called a "like for like" concussion substitute for Jadeja.

"There was no doubt that Jadeja was hit on the helmet and there could have been a concussion. A decision was taken that there was a concussion and a replacement was made. We are not doubting that," Henriques said at the post-match conference.

The second T20I will be played on Sunday at SCG, Sydney.