While India won the shortest format 2-1, it was overall an even result for the two teams which won three white-ball games each 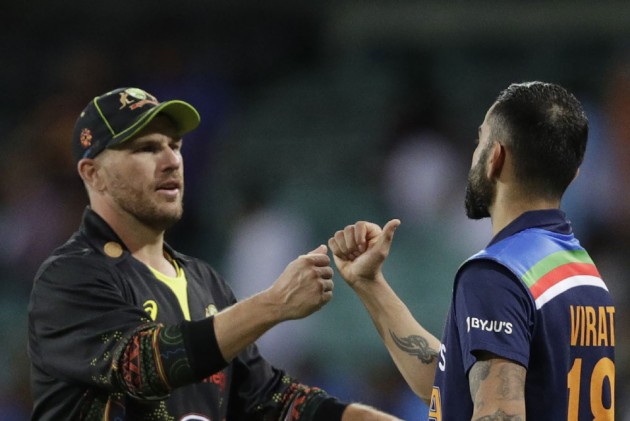 Australian bowlers held their nerves to come up trumps against the genius of Virat Kohli, stalling an Indian clean-sweep with a 12-run victory in the third and final T20 International in Sydney on Tuesday.

While India won the shortest format 2-1, it was overall an even result for the two teams which won three white-ball games each. Tuesday's loss ended the visitors' 10-match winning streak in the format.

Kohli got as many as four reprieves and cashed in well enough to smash his way to 85 off 61 balls but India could only reach as far as 174/7 in their pursuit of 187 in 20 overs.

It was a slash drive off Andrew Tye in the penultimate over which was plucked inches off the ground by Daniel Sams, who compensated for a forgettable day with the ball.

An over before that Hardik Pandya's swagger was checked by Adam Zampa (1/21 in 3 overs). Zampa's leg-break turned enough to force the 'Baroda Bomber' to hit one against the turn and be caught at short third-man.

Once Pandya was gone, there was too much pressure on Kohli and this was one rare occasion when he failed to take the team home.

While he hit four fours and three sixes, Kohli did lead a charmed life as Steve Smith missed a dolly at deep mid-wicket fence when he gave Maxwell the charge.

Then Sean Abbott failed to get his hands on a tough return catch while another slipped through Tye's palms. During the fag end, Matthew Wade missed an easy stumping.

The Indian captain scored his third half-century of the tour and an effortless six off Abbott after the completion of the milestone gave much-needed relief to the Indian dug-out. This was after Mitchell Swepson's (3/23) innocuous leg-breaks reduced them to 100 for 4.

Swepson would be the first to admit that he was lucky to dismiss Shikhar Dhawan (28 off 21 balls) with a half-tracker and ever unreliable Sanju Samson (10) with a low full-toss.

The only wicket-taking delivery he bowled was the one that got Shreyas Iyer out for a first-ball duck.

While Pandya (20 off 13 balls) initially took time, Kohli decided to take matters in his own hands as he first deposited Sams into the mid-wicket stands and then guided a rising delivery behind square.

Zampa dismissing Pandya turned out to be the turning point.

Earlier, Wade's second consecutive half-century was well-complemented by Maxwell's blazing strokeplay as Australia posted a competitive 186 for 5 after being put into bat.

Wade, who has played all his big T20 knocks against India, smashed his way to 80 off 53 balls with the help seven fours and two sixes.

Maxwell, who struggled with his timing initially, also got into the act during the last six overs with a 35-ball-54 and a third-wicket stand of 90 runs in 8.4 overs with Wade.

India's bowling heroes were Washington Sundar (2/34 in 4 overs) and Thangarasu Natarajan (1/33 in 4 overs). Natarajan, despite a few boundaries conceded in the final over, was pretty impressive.

The wicketkeeper-batsman was quick to bring out his pull-shot and the whipped flick whenever anything was pitched in the arc.

He was the dominant partner during the 65-run stand with a scratchy Steve Smith (24) but played the second fiddle once Maxwell got his touch back.

For Maxwell, the 15th over by Chahal was the one that changed the course. Once he got the reprieve, he deposited Chahal for a straight six and followed it with another into the mid-wicket stands.

Riding on his luck, he got another life in the 17th over when a mis-hit was dropped by Deepak Chahar running in from deep point.