Saini became India’s 299th Test cricketer when he was handed his cap in a ceremony by Jasprit Bumrah before the start of Sydney Test. 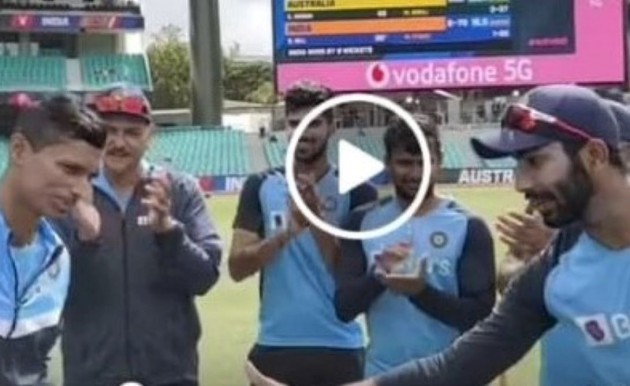 Navdeep Saini became India’s 299th Test cricketer when he was handed his cap in a ceremony by none other than Jasprit Bumrah before the start of Sydney Test.  LIVE SCORECARD | NEWS
Pacer Navdeep Saini is the direct replacement for Umesh Yadav, who got injured during the second Test in Melbourne.

Congratulations @navdeepsaini96. He realises his dream of playing Test cricket for #TeamIndia today. A proud holder of ðÂÂ§¢ 299 and he receives it from @Jaspritbumrah93. #AUSvIND pic.twitter.com/zxa5LGJEen

Rain has stopped play in the opening session of the third Test.
Australia are 21 for one in 7.1 overs when play was interrupted at the Sydney Cricket Ground.

Pacer Mohammed Siraj sent back the returning David Warner (5) to give India their first breakthrough before the heavens opened up.

Earlier, Australia won the toss against India and opted to bat in the third and penultimate match of the four-match series.

For Australia, opener Warner came back into the team with Pucovski making his debut at the expense of Travis Head.